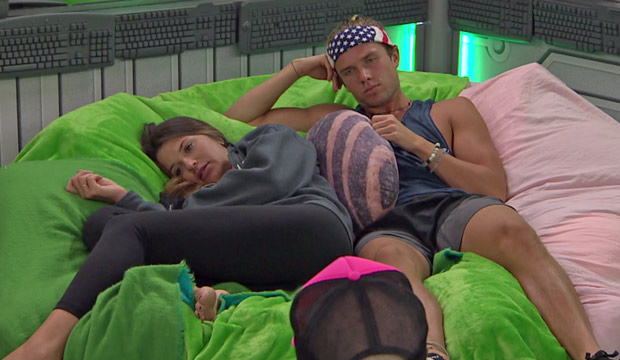 Last week during the first double eviction episode of “Big Brother” Season 20, the hour began with Haleigh Broucher being eliminated on her third consecutive week on the block. Then, after Tyler Crispen won the live Head of Household comp, he put up two pawns — Sam Bledsoe and JC Mounduix — because his Level 6 alliance had a backdoor plan in motion. Tyler’s showmance partner Angela Rummans won the Veto challenge and removed JC from the block, so Tyler replaced him with his real target, his BFF Brett Robinson. A shocked Brett was unanimously evicted, which left only five players still in the hunt for the $500,000 prize.

Below, check out our minute-by-minute “Big Brother” recap of Season 20, Episode 36 to find out what happened Sunday, September 16 at 8/7c. Then be sure to sound off in the comments section about your favorite houseguests on CBS’s reality TV show, who annoys you the most, and who you think will ultimately join the “Big Brother” winners list. Keep refreshing/reloading this live blog for the most recent updates.

8:40 p.m. – “Previously on ‘Big Brother’!” In Thursday’s episode both Haleigh and Brett ended up being sent packing in the double eviction. Haleigh’s ouster was expected, while Brett was blindsided, betrayed and backstabbed (pick your favorite B word) by his Level 6 alliance. With only five players left in the game (Tyler, Angela, JC, Sam and Kaycee Clark), who will win tonight’s all-important Head of Household competition and claim control of the house? Let’s go!

8:45 p.m. – Following Brett’s eviction the house celebrated their Top 5 status, but JC is in shock and annoyed. It was the first time JC was out of the loop on a major move and he’s pissed off at Tyler. In the Diary Room, Tyler lays out how he successfully hatched and executed the plan to blindside Brett. In a flashback, we see JC begging Tyler not to send Brett home and Sam calling Angela an entitled bitch.

8:50 p.m. – Sam tells Angela she called her a bitch and apologizes. It wasn’t something she had to cop to, but she does and Angela forgives her. But in the Diary Room, Angela says “this bitch will eventually send your ass home.” I do appreciate that Angela owns her ruthlessness. Meanwhile, Tyler is doing damage control to make sure JC and Sam don’t target him if they win HOH. He tells Sam that Brett was targeting her and she believes him. JC isn’t as gullible and doesn’t believe Tyler when he tells him that Brett was targeting him. He’s convinced Kaycee and Angela are going after him and at this point if JC is evicted I think he will definitely have bitter feelings for Tyler. Kaycee is looking more and more likely to win if she gets to the end.

9:10 p.m. – It’s time for the HOH competition! As the outgoing HOH Tyler is not eligible to compete. The backyard is decked out like a home movie theater. In “BBFlix and Chill,” three movie posters will appear on the screen in front of the houseguests. A group of friends will then describe which movie they want to watch. What they say are clues to the one movie they all agree on. When a player knows which movie is correct, they must press the corresponding button. The player with the most points after seven rounds will be the new HOH. After seven rounds, Angela edged out Sam and JC (Kaycee got 0 points) to win her third HOH of the season!

9:15 p.m. – JC is fuming because he can’t win a competition to save his life. Knowing Sam and JC will be put on the block, Tyler needs to figure out how to manage them. Angela wants Sam out before JC because everyone in the jury house loves her. Tyler is getting worried as the end nears. If he chooses the wrong person to go to the final two with (assuming he makes it that far) it could cost him $500,000. At this point, I’d say he could beat anyone but Kaycee. The smartest pick would definitely be Angela. But I don’t think he’s figured that out yet!

9:20 p.m. – Tyler and Angela are grossly staring into each others eyes when she confesses she’s in love with him. The game made Angela grow a heart! I hate showmances, but what Tyler doesn’t know is this is probably the best thing that could happen to his game. His new forced loyalty to Angela will probably win him $500k. Tyler confesses he is in love with her as well and he’s the happiest person in America. How sweet.

9:22 p.m. – JC is trying to keep his cool, but he’s fuming. He tells Tyler they have made a huge mistake and he knows he’s going on the block with Sam. He said if Brett was in the house right now, he wouldn’t be heading for the block. JC is making a terrible game move by losing his cool while he has no power. If he doesn’t watch it he will be walking out the door next instead of Sam.

9:30 p.m. – Angela has a special announcement to make in the living room. “Big Brother” has congratulated them on making the Top 5. They’ve been invited to a private concert from superstar recording artist, Bebe Rexha. She’s performing her new single, “I’m a Mess.” Sam and Angela are totally fanning out. JC and Kaycee are waving a rainbow flag and Tyler is just chuggin’ back a few beers. Following her performance, Bebe asked if they feel like they’re minds feel more clear without cell phones and social media. The houseguests all agree it’s been a great break before Bebe starts singing again while Sam cries hysterically.

9:35 p.m. – It’s time for the nomination ceremony! As expected Angela nominates JC and Sam. She said she’s had to get so much blood on her hands at this point in the game and their hands are clean. Sam is annoyed that she’s been on the block for the third time in 48 hours. JC hopes to take himself off the block and go after Angela, even though if he were thinking logically he should hope to go to the end with her. Once again, nobody is even thinking of targeting Tyler, the biggest threat in the game. That’s a wrap for tonight! See you on Wednesday night for a special eviction episode of “Big Brother!”