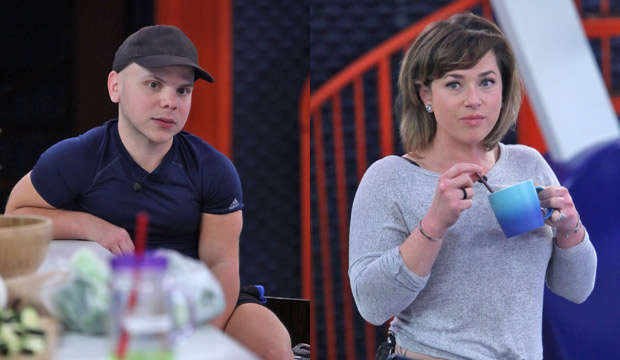 Wednesday night on “Big Brother” 20, the five remaining houseguests were shocked to learn about the impending surprise eviction. Angela Rummans was safe because she was the Head of Household, but everyone else was in danger of heading home: JC Mounduix, Sam Bledsoe, Tyler Crispen and Kaycee Clark. JC and Sam went into the episode on the block, but with the Veto challenge on the line anything could still happen. So how did it all play out?

Below, check out our minute-by-minute “Big Brother” recap of Season 20, Episode 37 to find out what happened Wednesday, September 19 at 8/7c. Then be sure to sound off in the comments section about your favorite houseguests on CBS’s reality TV show, who annoys you the most, and who you think will ultimately join the “Big Brother” winners list. Keep refreshing/reloading this live blog for the most recent updates.

SEE‘Big Brother 20’: Will Brett be a bitter juror after getting blindsided?

8:00 p.m. – “Previously on ‘Big Brother’!” In Sunday’s episode the house reacted to Brett Robinson‘s blindside, but no one was more upset than JC. He didn’t really care that Brett was gone, he was just annoyed that no one filled him in on the plan. JC was admittedly “pissed” that he was nominated for eviction by Angela, while Sam hissed “f*** them” in the Diary Room. Bitter jury much? Tonight all eyes are on whether the Veto will save either JC or Sam’s game, or whether the Level 6 alliance of Angela, Tyler and Kaycee will be broken up. Let’s go!

8:02 p.m. – Julie Chen shocked the houseguests as she dramatically called them to the living room and asked that nobody sit in the nomination seats. She informed them that one of them would be evicted by the end of the night and peaced out. Expect the unexpected!

8:05 p.m. – Following Sunday’s nominations, Angela says Level 6 is unstoppable and they will be the final three. Sam knows they aren’t out to hurt her, they just want the money. JC is upset that he’s had Tyler’s back all season and he doesn’t feel like Tyler has his. Tyler wants to sit with someone from Level 6 at the end so he’s not the only one with blood on his hands.

8:10 p.m. – JC is talking to a stuffed owl on the nomination chairs. Finally, JC pulls Tyler aside and tells him he feels alone in the game. Tyler has Angela and Sam “doesn’t even count.” JC doesn’t trust Tyler, but thinks he can get in his head. He reaffirms to Tyler that he wants Angela or Kaycee to go home. Tyler is tired of JC trying to tell him what to do and thinks it might be a good idea to send him home before Sam.

8:20 p.m. – Sam is building crafts on the floor in the bedroom when the rest of the houseguests start having a food fight with whipped cream. Is she making a voodoo doll? It’s time for the Power of Veto competition! One at a time, players go into the backyard. They have to travel through a maze, find three targets in the correct order and then remove a sword from a stone. The competitor who completes this the fastest will win the POV.

8:25 p.m. – Tyler does a respectable job and appears to have gotten a good time. Kaycee, Angela and Sam all appear to struggle and I don’t expect any of them to win. It looks like it will be up to JC to take down Tyler and pull himself off the block. He doesn’t look to be doing much better though and this might be a landslide win for Tyler. Will JC finally realize Tyler isn’t on his side when he chooses not to use the Veto? Or will JC just be sent to the jury house before he has time to think at all?

8:30 p.m. – The results are in! Production played some tricks on us and it is revealed that Kaycee has won yet another Veto! She’s been a competition BEAST lately. Angela and Sam didn’t even finish the challenge. This is probably the best thing that could have happened to Tyler. He won’t have to betray either Sam or JC…yet.

8:35 p.m. – It’s time for the Veto meeting! As expected, Kaycee has chosen NOT to use the Power of Veto. Either Sam or JC will be heading out the door by the end of the night. Sam is beginning to question Tyler and she’s not sure she can trust anybody. JC is still hopeful he’s the pawn so he can win the next HOH and make everyone suffer. Tyler breaks down in the Diary Room, tortured by the fact that he will have to choose between Sam or JC. The problem with playing such a great social game is it hurts that much worse when you betray someone. This jury could be turning on Tyler!

8:40 p.m. – It’s time for the eviction! Sam was a bit flustered during her speech and simply said she loved everyone and wasn’t ready to leave. But if she does, she hopes someone feeds the fish so they don’t die. JC professed his love to everyone also and called Tyler his “Big Brother” boyfriend who has to keep him. It’s now time for Kaycee and Tyler to vote. By a vote of 2-0, Sam has been evicted from the “Big Brother” house. I hope she rips the doors off the hinges!

8:55 p.m. – I’m sad Sam left so calmly. I wanted her to go on a rampage like she said she would a few weeks ago. Anyways, it’s time for the HOH competition! As the outgoing HOH, Angela is not eligible to compete. The winner is guaranteed a place in the Top 3. JC, Kaycee and Tyler will compete in “What the Bleep?” After viewing a number of statements made by fellow houseguests this summer, Julie will fill in a “bleep” and the players will have to decide if her answer is true or false. The player with the most correct answers after seven rounds will be the winner. After seven rounds, JC has won his first HOH (and competition) of the season! Someone from Level 3 will be sent packing Wednesday night.

8:59 p.m. – JC probably doesn’t realize Tyler won’t take him to the Final 2 (although if Angela goes home tomorrow he may) and will likely target the girls. The jury seems to be so bitter, but who knows what can happen as they have time to reflect? At this point, I would want to go to the end with Angela. JC, Kaycee and Tyler all have a shot depending on how the jury feels. That’s a wrap for tonight!