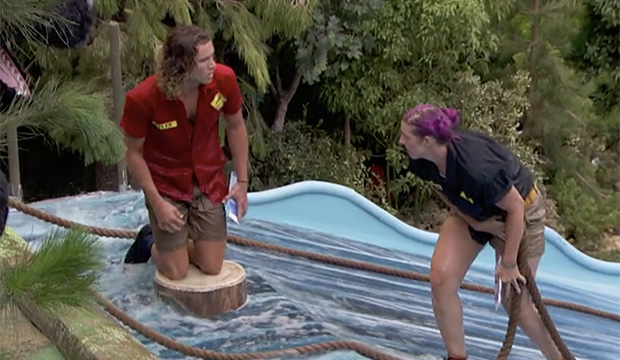 Congratulations, Rockstar! You finally won something this season — sort of: 37 percent of our readers say you made dumbest move of The Hive on “Big Brother 20.”

We know, it was probably a Sophie’s Choice for many of you. The Hive did so much idiotic stuff this season you had to see to believe; they were like the walking embodiment of “Is this real life?” And really, you couldn’t have scripted Rockstar’s OTEV blunder any better. She told Tyler the correct answer for some reason, allowing him to change his answer before Haleigh could find one. Why would you check your answer with the enemy — whose side just secretly put you on the block — instead of with your ally? We may never know. Rockstar had a chance to redeem herself in the final round, returning first with an answer, but ironically she brought back the wrong one, handing the Veto to Tyler. It was all too good to be true.

SEE Watch Tyler stress out about Angela on ‘Big Brother 20’: ‘I really hope I didn’t f— it up’

Coming in second with 31 percent is Faysal, for stupidly targeting Scottie. Fessy ostensibly said he nominated him to flush out the flip votes before finally admitting it was out of jealousy, because Scottie liked Haleigh. JC expertly did his part to convince Fessy that Scottie is after his girl and wanted to take Fessy out, and Fessy couldn’t stop thinking with his other head. Look, even if you’re jealous, which is natural, it makes no sense to go after one of your two alliance members left when your side is already taking a hit in the numbers.

In third place with 21 percent is Bayleigh, for telling Rachel about her Power App. Bayleigh had a lot of potential and was in a good spot when she won HOH, but her mouth became her downfall. You don’t tell someone from the other side about your power and then nominate them. Her power got exposed and instead of using it the next week on Angela‘s HOH, she opted to tell her about the app’s real expiration date, which was later than Level 6 had thought, spurring Level 6 to successfully get Bayleigh out with an unused power.

With 7 percent, Kaitlyn‘s backdoor of Swaggy C came in fourth place. Swaggy was loud and annoying and arrogant, but for then-FOUTTE’s sake, there was absolutely no reason to turn on each other in Week 2. But Kaitlyn completely bought everything Tyler fed her about targeting Swaggy, and this was a sign of all the moronic FOUTTE things to come.

Haleigh’s house meeting, in which she revealed herself to be the hacker, grabbed 4 percent. She had honorable intentions in calling the meeting — to clear Bayleigh’s name — but she completely effed up her own game in the process. She had made an initial good move in secretly nominating Tyler, but telling the whole house her secret rendered her hacker win a complete waste. Like Bayleigh, Haleigh was in a good spot before she opened her mouth and made herself a target.