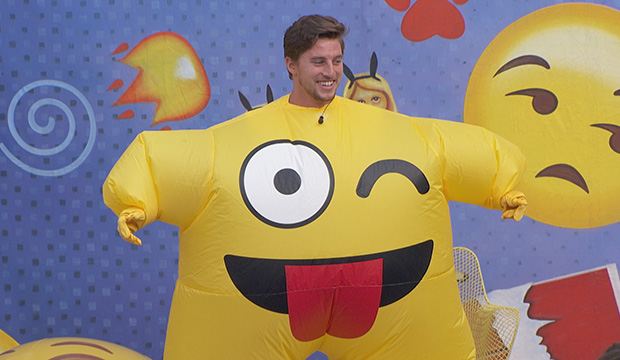 Just when it seemed like it was going to be another low-key week on “Big Brother 20,” things got slightly interesting on the live feeds Wednesday night: Brett is considering turning on Level 6, specifically targeting Angela.

It all started after production gave the houseguests alcohol. Haleigh imbibed a wee bit too much and decided to pull a prank on Brett, spraying him with the sink hose. He was not pleased and threatened to keep Scottie instead of her, causing drunk Haleigh to cry. (#neverforget the last two times Haleigh got drunk, she tried to pitch Tyler while she was in the bathtub and was an accomplice in getting Faysal to put up Scottie.)

The incident spurred Brett and JC to chat about actually keeping Scottie (they’d already have Sam, who hates Haleigh, and you just need three votes this week to go), but after a convo with Tyler, JC promised to evict Scottie and even gave his word to Haleigh. He then turned his sights to targeting Angela, not Haleigh, next week with Brett.

SEE ‘Big Brother 20’ spoilers: Will we get our second unanimous vote?

Angela has long been a thorn in JC’s side since he wants Tyler all to himself for game and personal reasons, which is partially why Tangela has been so covert. He’s already tried to brainwash Brett, telling him how Tyler and Angela’s closeness would be bad for him, but Brett just nodded along and then reported JC’s paranoia back to Tyler.

This time, however, Brett seems to be entertaining the idea legitimately. He told JC he’s annoyed that he can’t get a minute alone with Tyler because Angela is always up in the HOH room, and he thinks Angela and Haleigh have gotten too close. “Haleigh pissed me off tonight because it was stemming from Angela,” he said. “Haleigh felt comfortable, confident and arrogant because she is with Angela.”

Brett suggested backdooring Angela next week, but JC shot it down, saying they have to nominate her from the start, and after she goes, they can pull Tyler back in with them without Angela as a distraction. “[Tyler] is so far gone,” Brett said. “He needs to get his sh– together. If he is so far gone, then he is going to get himself evicted right after [Angela],” JC replied. Brett then agreed that Angela needs to go next week because it’s only two votes to stay after that, and she’d have Tyler’s and Kaycee‘s votes.

Is Brett just placating JC or is he actually going to turn on Level 6? This is the most vocal he’s been about getting Angela out versus just agreeing but not committing outright with JC to get him to shut up. Brett has always been loyal to Level 6, but he is very aware that he is the lowest man on the totem pole, hence his final two pitch to Tyler last week. Level 6 will have to turn on each other eventually, but none of them are thinking this early with other targets — including JC — left in the game. Brett could also have been fired up from the hose incident and might calm down by Thursday.

But the only way Operation Angela could happen is if someone other than Angela or Kaycee wins HOH (he and JC could talk Haleigh or Sam into targeting Angela). If Angela wins, obviously she wouldn’t be nominated, and if Kaycee wins, she won’t target her and Brett definitely would not try to turn on her. But if this flip somehow does happen, it would shake up the house after two rather straightforward weeks.