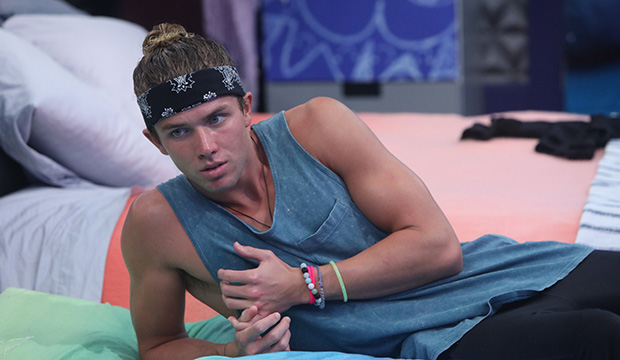 JC winning the final four HOH is bad news for Level 6 since one of Angela, Tyler and Kaycee is guaranteed to get evicted, but it might still be good news for Tyler because everything is still going according to his plan.

Emphasis on “his.” Tyler has talked about making it an all-Level 6 final three with the group — and he certainly wouldn’t have minded had it happened — but privately he’s had a different trio in mind. During his Week 10 HOH (when Scottie was evicted again), he shared his hit list on CBS’ Snapchat. And who did he have in his final three? JC, Kaycee and himself.

@CBSBigBrother obviously could've changed, but when tyler did his snapchat glasses target list, he had angela going out next with jc in final three. ???????????? #bb20 pic.twitter.com/4FoxDrbtN1

That’s right, he wants evict Angela at final four. However, this was before Tangela declared their love for one other, so it’s possible he may have had a change of heart (no pun intended) since then. But he has reassured Kaycee this entire time that it’s the two of them ’til the end. On Monday, they discussed how they think Angela thinks one of them would definitely take her to final two. “I really think she feels comfortable that we will take her,” Kaycee said. “I don’t think she wants to talk about it until she knows which one of us wins [the final three HOH],” Tyler replied. (Angela, notably, does not have final two deals with anyone remaining.)

They then discussed how JC could do the dirty work for them if he wins the final four HOH. “The good thing if he wins HOH, I think he wouldn’t want Angela in final three,” Tyler said. “I don’t see him winning HOH,” Kaycee said. Famous last words.

JC indeed does want Angela out and has nominated her and Tyler. Kaycee will definitely boot Angela if she or JC wins Veto, but will Tyler follow through with his plan if he wins Veto? The other thing he has to consider is that Kaycee’s racked up quite the resume with her string of comp wins and is liked by the jury, so he could lose to her, and he knows this. The jury also thinks Angela is controlling Tyler, which he knows about, so if he’s the one who cuts her, that could score him some points.

Based on everything he’s said in his Diary Rooms and to Kaycee, and because he is a superfan and it’s his dream to win “Big Brother,” we can see Tyler being ruthless with his heart and evicting Angela. And frankly, that would be a refreshing change of pace for a showmance not to have each other as their No. 1.