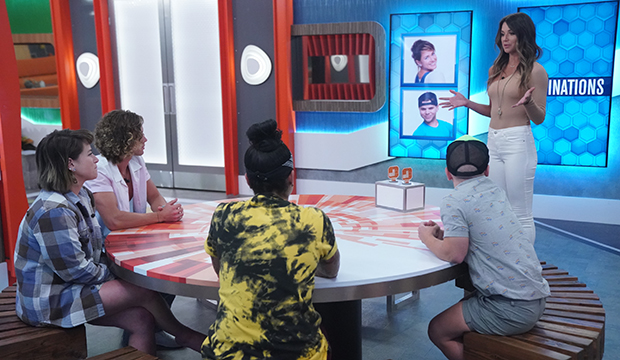 Expect the unexpected indeed. Just when it appeared like the last three members of Level 6 will cruise to the final three on “Big Brother 20,” we got the biggest blindside of the season: JC won a comp! Yes, JC actually won something! He is the final four HOH, which means he’s guaranteed a spot in the final three and Tyler, Angela and Kaycee will be broken up.

Since there is a live feeds blackout until Wednesday night, according to production source Vegas, the comp, What the Bleep?, was held Tuesday evening shortly after Sam was evicted as expected. So yeah, JC won a mental comp. That ended Level 6’s streak of 11 straight comp wins, dating back to Brett‘s Veto victory. Level 6 had been saying all week how they only needed two more wins to secure the final three, but they probably tempted fate. Angela even said Sunday, “I just hope that JC doesn’t pull something out of his ass last minute competition-wise.” Oops.

Julie was a pro as always.

Suffice it to say, this was the best time for JC to finally pull out his first win. He was certainly going to be a dead man walking had Level 6 won. Since it’s another truncated week, he made his nominations Tuesday night: Tyler and Angela.

SEE ‘Big Brother 20’ spoilers: Who won second Week 12 Power of Veto competition on #BB20 and what does this mean for September 20 eviction?

Angela is not shocking at all — he’s had his sights on her for weeks ever since he saw the early signs of a Tangela showmance. The Tyler nomination proves that he kept his word to Kaycee from Monday night to keep her safe and that maybe he finally got a clue that he is not Tyler’s No. 1. Or the very least, he’s still pissed about Tyler backdooring Brett in the double eviction. JC has already said in the Diary Room that he doesn’t believe Tyler when he said Brett was going to target JC.

So it will all come down to the Veto, as it does in every final four. If JC wins Veto as well, he’ll decide who gets to vote to evict. If it’s not him, the Veto winner will be the sole vote. Tyler is likely the safest of the three of them. If he wins Veto, he’s obviously taking himself off. If Kaycee wins, she’ll evict Angela because Tyler is her ride or die. Angela is the only wild card since she and Tyler don’t have a final two, but she has said she would have no problem evicting him. However, that was before she told him she loved him, so there’s a good chance she’d take him too.

JC should consider keeping Angela instead of booting her since the jury hates her and she is the person he’d likeliest win against. But he still incorrectly sees Angela as the head of the operation and thinks Tyler and Kaycee would both pick take her to the final two over him, when it’s actually Tyler and Kaycee who have a final two, and it’s Tyler whom they’d both take (Kaycee for sure; Angela, maybe).

Nevertheless, this is the last-minute shake-up we needed at the end of the game just as it got a wee bit predictable.