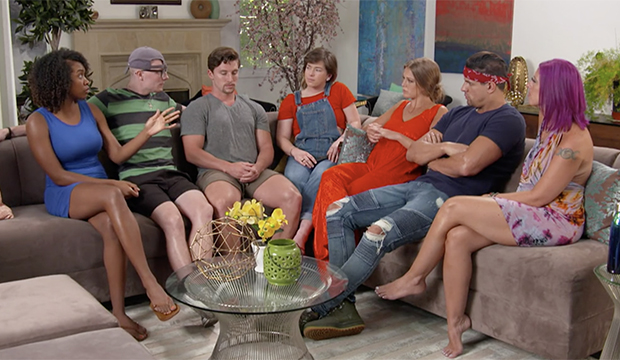 To be bitter or not to be bitter? That is the question. We finally got an extended jury house segment on Thursday’s “Big Brother 20,” giving us a glimpse into the jurors’ headspace. There are still an HOH comp to be played, an eviction to be had and speeches to be made before the jurors cast their votes for the winner on Wednesday, but let’s handicap how the current eight jurors might vote.

Bayleigh
Despite being in the jury house the longest, Bayleigh doesn’t seen to have acquired much self-awareness or clarity out of the game. She couldn’t even acknowledge that her telling Rachel about her Power App is just as, if not more, dumb than Faysal targeting Scottie. Her comment about how Angela and Tyler think they’re a power couple was dripping with disdain, and she doesn’t think the two of them getting blood on their hands is good gameplay, which logically doesn’t make much sense — getting blood on your hands is not necessarily a bad thing; you want to be able to own a big move.

In a Kaycee vs. Tyler final two: She’ll probably go for Kaycee, whom she said is playing the best game without getting blood on her hands.
In a Kaycee vs. JC final two: This could go either way, but we’ll lean Kaycee. JC was close with FOUTTE and he got out Angela, which Bayleigh would appreciate, but Kaycee has done and won more.
In a Tyler vs. JC final two: JC. Bayleigh is not gonna forget that insane house meeting that she completely derailed.

Rockstar
Good news for the final three: The person Rockstar is the most bitter towards is Brett! Rockstar was one of the most, uh, emotional people in the house, but she seems to be quite chill in the jury house, even pointing out that “Tyler actually never did wrong by me. He just knew I was targeting him since Week 1 or 2, and he wasn’t wrong.”

In a Kaycee vs. Tyler final two: She’ll likely vote for Kaycee, with whom she never had a problem and to whom she never gave a Veto answer. “Kaycee is playing the best game,” she said. “She hasn’t made any enemies and she’s winning where it counts.”
In a Kaycee vs. JC final two: Kaycee again, because of her wins.
In a Tyler vs. JC final two: Based on her aforementioned comment and if she’s gotten over the OTEV fiasco, which it seems like she has, then Tyler.

Faysal
As dim as Fessy is, at least he knows how idiotic FOUTTE/The Hive was unlike some people. Fessy didn’t vocalize his thoughts on the remaining houseguests (probably because he’s still trying to figure out who flipped) in the episode, but he doesn’t appear to harbor much resentment.

In a Kaycee vs. Tyler final two: We’ll lean toward Tyler since they were closer and he did reach out to Tyler to make a final four with Haleigh and Angela. There’s also a good chance Fessy will vote the same as Haleigh and she seems to be Team Tyler (see below).
In a Kaycee vs. JC final two: This could be a toss-up. Fessy and JC were tight, even though JC completely used him and, unbeknownst to Fessy, called him a big dumb puppet. JC may have to own up to that in his speech, and depending on how he comes off (he’s not the best at sounding, well, not condescending), Fessy might hold it against him. Since he’s an athlete himself, Fessy would probably appreciate Kaycee’s comp victories, so we’ll go with Kaycee. (#neverforget Fessy said it wasn’t worth targeting Kaycee because she doesn’t win anything.)
In a Tyler vs. JC final two: Tyler. He has the stronger resume by far.

Scottie
Scottie appeared like he was going to be super salty in his second exit interview with Julie Chen, in which he called Tyler a “coward.” But he also seems to have cooled his jets in the jury house, though he was still dense not to have realized Tyler didn’t have his back until Brett and Sam talked about their final two deals with him.

In a Kaycee vs. Tyler final two: Tyler. “As much as I hate that he [used me], I gotta respect the move,” Scottie said.
In a Kaycee vs. JC final two: Kaycee. JC might have to own up to coercing Fessy into nominating Scottie, which Scottie could/should respect, but again, depending on JC’s tone, it not come off great. Kaycee’s wins should also give her an edge.
In a Tyler vs. JC final two: Tyler. He respects the move.

Haleigh
At 21, Haleigh is the youngest houseguest this season, but she was definitely the most level-headed one during the jury segment. She realized Tyler has been playing a better game than she had thought and any time someone exhibited any bitterness (ahem, Bayleigh), she shot them down and gave Level 6 credit.

In a Kaycee vs. Tyler final two: Tyler. Haleigh was one of the people who thought Tyler was being seduced by Kaitlyn’s and Angela’s feminine wiles, but she admitted on Thursday that Brett’s blindside was “perfectly orchestrated” by him. “I feel like Tyler knew exactly what he was doing and is running a lot more than I ever gave him credit for,” she said.
In a Kaycee vs. JC final two: Kaycee. Not only does she have the comp wins, but she and Haleigh got super close during Haleigh’s last weeks in the house.
In a Tyler vs. JC final two: Tyler. Easy.

Brett
Anyone would understand Brett being bitter toward Tyler about being blindsided, but he’s taking it all in stride. He had already told Chen in his exit interview that he respects the move, and one of the things Level 6 has always done better than the other side is separating the personal from the game.

In a Kaycee vs. Tyler final two: Tyler. They were closer, and Brett has already said he understands why Tyler blindsided him. He didn’t know about Tyler’s final two with Sam, but he’s unlikely to hold that against him either since Brett was the one who pitched a final two to Tyler. As long as Tyler explains and owns up to all his moves in his speech, which there’s no reason to think he won’t do, he should be good with Brett. Tyler could also stroke Brett’s ego by telling him he thought Brett was his biggest threat.
In a Kaycee vs. JC final two: Kaycee. Brett and JC were getting tighter toward the end, but Brett will remain loyal to Level 6 here.
In a Tyler vs. JC final two: Tyler, because of all of the above.

Sam
Oh, Sam. She is not cut out for “Big Brother.” It’ll be interesting to see if the week between her eviction and the finale, not to mention the jury roundtable, will clue her into the machinations of the game a bit more. But as of Thursday’s episode, she is not happy with Tyler.

Angela
Next to Haleigh, Angela also displayed the most maturity in handling her eviction. She wasn’t pissed when she learned of Tyler and Kaycee’s final two deal and knows it’s all just a game, even if she’s personally upset her boyfriend kept a secret from her.

As for whoever becomes the ninth juror, it’s safe to say that Tyler and Kaycee would vote for the other against JC, while JC, who will likely be the most bitter since he will have just been evicted before casting his vote, will probably vote for whoever didn’t evict him.

So under these guesses, who would win?