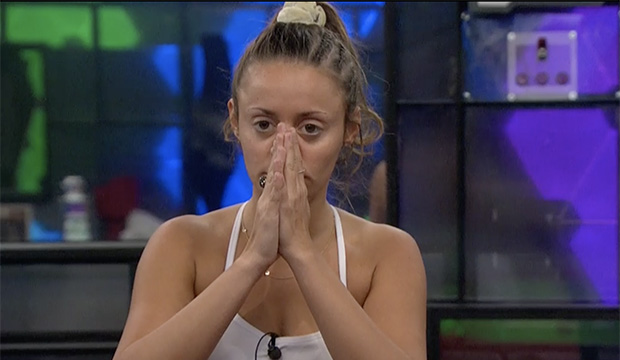 Oh, Kaitlyn. What did we do to deserve you? Kaitlyn Herman hasn’t stopped serving up the krazy since she entered the “Big Brother 20” house, but she may have peaked Monday with some downright, totally insane conversations.

Around 11:15 a.m. PT on the live feeds — before the Veto ceremony has happened — Kaitlyn decided to tell HOH/Veto holder Scottie that she was the flip vote that booted his BFF Steve and then proceeded to tell him that Sam had a Power App and would’ve targeted anyone voting to save Steve.

SEE ‘Big Brother 20’: Week 3 Power of Veto ceremony results on #BB20 and what they mean for July 19 eviction

“I didn’t have a choice. Someone was going use their power, and all the people that voted to evict Steve were going to be chosen to be on the block,” she said. “I know that if I vote to evict Sam, this power is about to be used and one of us is going up and going home that night. That power, she still has. If I was put up, she already told me that she would use it.”

She claimed she was manipulated into voting out Steve and that if Scottie uses the Veto and puts her up as a replacement nominee, Sam has the power to take her off. She then shared that during her HOH, the bros, Winston and Brett, told her what to do all week and were gunning for Scottie, and she wants to come clean to Scottie now in the name of authenticity (lol).

Oh, and there was this choice quote: “I feel intuitively that I’m being received really well by the world.” And this one: “The fact that I didn’t win a Power App is legit disrespectful. What more could I have done?” Which, fair. Ain’t no entertainment like Krazy Kaitlyn Entertainment.

The one good thing she did was not tell Scottie that Tyler has also known about Sam’s power. But clueless Scottie, who stared at Kaitlyn the whole time she was blabbering, then told Tyler what Kaitlyn had told him. When Tyler broached Kaitlyn about it, she told him to to trust her intuition next time because she did this after — are you ready? — Tyler’s dead father told her in a dream last night to tell Scottie: “When Donny comes to me in a dream and says ‘Stop listening to my f—in’ dumbass son,’ I’m going to do it, which happened last night.” Can’t make this stuff up.

SEE ‘Big Brother 20’ spoilers: Should Sam use her power this week after Monday’s drama? [POLL]

For his part, Tyler remained cool as a cucumber even though Kaitlyn just put their games in danger. Now basically everyone knows about Sam’s power, which she has to use this week or it’s automatically used next week, and word could get out that Kaitlyn was the Steve flip vote, which could open up a whole new can of worms.

Tyler was also a whole lot calmer than we would’ve been when Kaitlyn implied that he was her soul mate — because a psychic medium told her last year that her soul mate’s name began with “T” and she immediately thought of the name “Tyler” — and when she said things like, “I’ll never, unless you tell me otherwise, I’ll never question like what’s deeper between us, like what can do unsaid. And you can do the same for me.” What?

The Veto ceremony was held shortly afterward, during which Scottie did not use the Veto on Winston or Brett. It was dumb of Kaitlyn to tell him before the ceremony, but it was also probably too late for Scottie to digest it and brainstorm alternatives with other people; all of this happened in a 45-minute span. Scottie probably wasn’t thinking too clearly after getting his mind blended by Kaitlyn, but what he should’ve done is ask Sam if she would use her power on Kaitlyn and if she had said no, he should’ve backdoored Kaitlyn. Bet Kaitlyn wouldn’t have intuited that.

Still, her completely unnecessary reveal about Sam’s power and her flip vote is bound to make waves before Thursday’s eviction. Immediately after the Veto ceremony, Tyler told JC that he “thinks” Kaitlyn told Scottie she was the flip vote for Steve. Whatever you think of Kaitlyn, you can’t deny that she brings the drama.