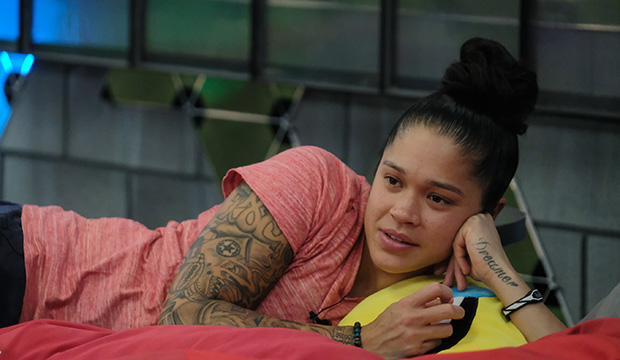 Remember three weeks ago when Faysal said he wasn’t worried about Kaycee on “Big Brother 20” because she doesn’t win anything? It’s like she overheard him and went, “Challenge accepted!” Kaycee has turned into a comp beast since then, winning HOH and now three straight Vetos — yup, she just won her third on Saturday, which will air on Wednesday’s episode — setting herself up nicely to win the whole damn show. Even Season 16 champ Derek said she was Tyler‘s biggest threat last week before her HOH and (obviously) Veto wins. But does she realize it yet? Or that she maybe should throw in an L to stave off a target?

SEE ‘Big Brother 20’ spoilers: Which 2 players will be eliminated in double eviction on September 13?

Unlike with Tyler, who’s still the favorite to win, we haven’t gotten much insight into Kaycee’s game plan and strategy in her Diary Rooms. She barely registered on the show early in the season since she was so low-key, but she’s now stepping up in a huge way with some clutch wins to keep Level 6 in control. Based on everything we’ve seen, including the live feeds, she still seems focused on making Level 6 her priority versus her personal game as it gets down to crunch time. Even Brett has realized he’s screwed if he doesn’t have a path to the final, hence his final two proposal to Tyler.

Kaycee, of course, already has a final two deal with Tyler, which he has reiterated to her and in his DRs is the one of his four deals that he plans to honor. Maybe she feels super secure with that, but she shouldn’t anymore. Tyler, superfan that he is, is well aware that Kaycee’s growing resume will hurt him (counting her Hacker victory, they both have five comp wins), along with the fact that the jury will be less bitter toward her than him.

Would Tyler actually take a shot at Kaycee though? Probably not. He could leave it to JC, who has wanted to break up Angela and Kaycee for a while. After Saturday’s Veto, Tyler tried to warn Kaycee that JC might nominate her, which she didn’t totally believe. That naivete might be her downfall. Even if she doesn’t think JC is a snake and would go after her, she should realize that her win streak is making her a huge target. She could’ve afforded to throw Veto this week, which admittedly would’ve been hard since it was BB Comics, an individually timed comp, but all of Level 6 was competing in it, so she had backup, so to speak. Instead, she crushed it with a time of two minutes, while Haleigh took 18 minutes. Yes, Kaycee did BB Comics in two freakin’ minutes.

That’s the type of performance that would puts a bullseye on your back. Kaycee has a strong case now for winning the game, and she has proven that she definitely has the skills to win the final HOH and pick who she wants to take to final two. People are not going to want to sit next to her, and she needs to have that lightbulb moment soon and make adjustments before she gets blindsided. Level 6 will inevitably start cannibalizing each other and she needs to start thinking long term instead of the immediate future. That might mean sacrificing the small battles to win the war.