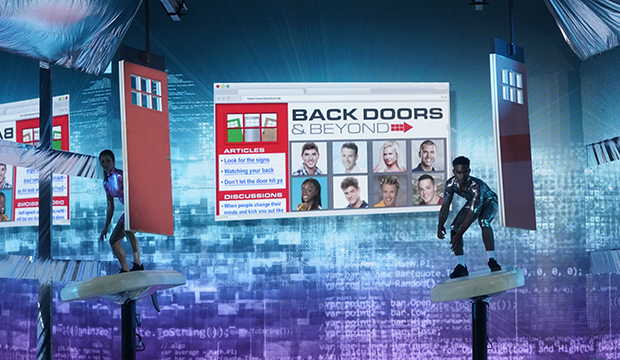 The results of the first BB App Store twist will be unveiled on Sunday’s episode of “Big Brother 20,” but the reward and punishment have already been handed out inside the house. And thanks to the live feeds, which started after Thursday’s episode, we already know the recipients of the fan-voted twists.

Faysal, who received the fewest number of votes, got the first Crap App punishment and now has to eat vegetarian ham whenever he gets a Hamazon Delivery. This result is hardly surprising — Fayshal has a very low-key personality and barely registered in the premiere episodes. Then you see his bicep and you’re like, “Oh, right, he’s the muscle guy.” Luckily, this is the worst thing that can happen to him this week since Swaggy C saved his group on the first night.

As for who received the most votes and the Power App that would help their game, it is RoboSam. Good job, America. One of the “BB App Store” questions this week was “Which Houseguest is most entertaining to watch?” The correct answer is always a robot. Sam’s reward is the power to save herself, which she must use in the first four weeks. She’s keeping it on the D-L, but, of course, that hasn’t stopped the house from trying to guess.

SEE ‘Big Brother’: Do you want Steve Arienta or Sam Bledsoe to be first eviction from #BB20? [POLL]

Winston thinks Swaggy C got it, but Rachel and Angela believe it’s JC. JC, meanwhile, thinks Brett won it. And Swaggy C thinks Angela got it since he didn’t save her group after the first comp. “I am 90 percent sure the other side doesn’t have it,” Rachel told Winston. “Don’t worry.”

SEE Where is ‘Big Brother 20’ hiding Sam while she’s a robot?

The “other side” is Kaitlyn, Fayshal, Rockstar, Haleigh, Swaggy C and presumably his showmance Bayleigh (they’ve already kissed). So yes, the house is already divided! Rachel’s group is Winston, Angela, JC, Brett and Kaycee. HOH Tyler appears to be playing both sides at the moment.