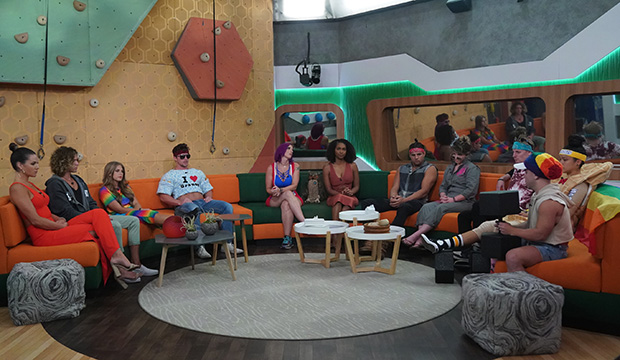 Sam cast the one dissenting vote in the 6-1 eviction of Bayleigh on Thursday’s “Big Brother 20.” That might seem as surprising as Faysal and Haleigh, cutting their losses, voting to evict Bayleigh, since Sam has voted with Level 6 this whole time. But a lot of stuff went down with Sam in the hours and literal minutes before and after the live eviction that we hope makes a future episode.

It all began Thursday morning when Tyler, trying to lock in Sam’s vote to evict Bayleigh, told her about his power. Sam got upset that he didn’t trust her with this piece of intel before, to which he said he does trust her and she’s the first person he told. Their conversation got interrupted and Tyler made the mistake of not having another sit-down with her — at least not that live-feeders could see before the feeds went down three hours before air — and instead Level 6 dispatched Kaycee to secure Sam’s vote.

SEE ‘Big Brother 20’ spoilers: Tyler just did something he totally did not have to do

But apparently all that did was upset Sam, who doesn’t want to evict her friend Bayleigh or her friend Rockstar. Classic Sam. She was so upset that she holed herself up in the Diary Room in the hour leading up to the live show and told producers she would refuse to cast a vote later, which they told her she can’t do, and then tried to self-evict, according to production source @realvegas4sure.

She said when they call her to the DR during live show she is going to refuse to vote. She was told she can't do that. She stayed and cried most of the time. Then tried to leave the DR through the side exit (which would be a self eviction) but was asked to stay.

Sam in DR again right now. She is told if she self evicts she will go from one of America's favs to being disliked but if she stays America will rally for her for being strong & not hate her for the vote.

She's leaving DR now but no clue what she is going to do.#BB20

Sam ended up voting to evict Rockstar because she didn’t want Bayleigh to leave with a unanimous vote. After the show, she cried to Fessy about how it wasn’t fair, and she thinks the whole house should’ve made themselves look ugly so Bayleigh could look even more beautiful when she left. But her meltdown came later when she bawled to both Haleigh and Rockstar about how much she hates it inside the house, wants to leave, wants to target Tyler and Angela, asked if Fessy is gay, and is convinced everyone is making fun of her behind her back (no one is).

Sam: People are making fun of me.

Haleigh: Why do you think that?

Sam: I need you to tell me.

Haleigh: No one is making fun of you.

Just imagine 13 variations of this exchange. It was exhausting, and if Sam is truly so emotionally distraught, she should just self-evict and the show should let her. She’s clearly not cut out for this game — she doesn’t even treat it like a game and can’t fathom why people want to talk game and strategy or why there are a bunch of “unfair” twists or why they have to vote someone out every week.

SEE Bayleigh Dayton (‘Big Brother 20’ exit interview): ‘Being in that house with those people drove me insane’

What’s interesting is that Sam’s TV edit is so different from what she’s like on the feeds. Outside of her HOH reign, during which she slut-shamed Kaitlyn and Haleigh, her TV edit’s been pretty mild, if not flattering. Even the segment of her protesting the Hacker Comp was edited goofily, like, “Oh, that Sam. There she goes again!” But that has been one of the many instances in which she doesn’t want to play and people have to figure out how to manage her inside the house.

But despite having seemingly turned on Tyler, Sam, as of press time, has not divulged his Power App secret to anyone.

'Big Brother 23': How to vote for America's Favorite Houseguest and reward them with…

'Big Brother 23' spoilers: Big D goes off on Kyland as the game plan gets locked and loaded

'Big Brother 23' spoilers: Xavier's Plan A looks like it will be executed... for now