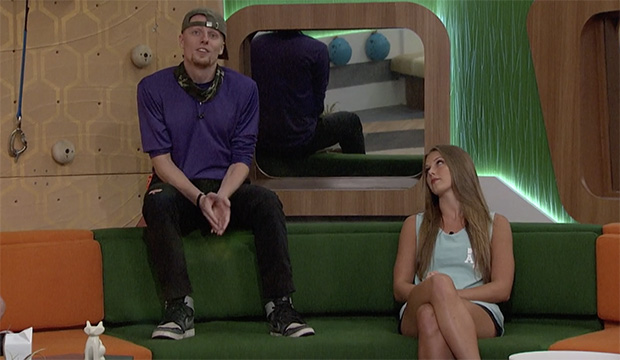 Stay classy, Scottie. Scottie’s eviction speech on Thursday’s “Big Brother 20” was one for the ages — and for all the wrong reasons. The Battle Back juror unleashed his potty mouth, gave the censor button a workout and nearly left Julie Chen speechless. It’s safe to say no one was expecting this speech.

You knew we were in for something when Scottie sat on top of the couch instead of standing up to deliver his speech as is customary. It started mildly enough. “Julie, first of all, I still don’t know if we’re hanging out again tonight,” he said before getting censored for his next sentence: “Everyone’s been dicking around all week.”

SEE ‘Big Brother 20’ spoilers: Who did Kaycee Clark nominate for eviction on the live September 13 episode of #BB20?

And then he went in for the kill: “I think you all know the right move and the smart move and I hope that you make it. If you don’t then you can suck it, except for Tyler because he’s already getting a steady diet of that.” The censor guy hit the button then before we could hear Scottie finish the sentence, but the houseguests confirmed on the live feeds afterward that Scottie had said “steady diet of that Hilton Head,” a play on the town Tyler and Angela are from. Plus, there was the vulgar hand motion Scottie made that left little to the imagination.

Everyone was stunned. Tyler tossed a stuffed animal at Scottie. After an interminable seven seconds, Chen deadpanned, “Well, that’s an original speech.”

Scottie’s NSFW antics didn’t end there: He flipped everyone off as he left the house. And while his exit interview was not profane, it was still weird and spastic even as Chen gave him multiple opportunities to explain himself.

SEE ‘Big Brother 20’ spoilers: Who won Week 11 Power of Veto competition on #BB20 and what does this mean for September 13 eviction?

It was quite a lasting impression, but an unnecessarily inappropriate one. Really, dude, what are you thinking? First of all, houseguests are told to keep it clean on the live shows — TPTB will forgive an f-bomb on the fly after, like, a blindside, but this was a clearly calculated speech, so producers are probably not too pleased with Scottie. Second of all, this was a cheap, crude shot at Angela and Tyler for no reason. He has no idea what their relationship is like, insinuated they were doing something he has no knowledge whether it’s true or not, and even if Scottie doesn’t realize it, he’s slut-shaming Angela. Third of all, if we’re talking semantics, what Scottie said doesn’t even make sense; he’s telling them to “suck it” except for Tyler, who’s getting a “steady diet of that.” So he’s doing the sucking? We know what you mean, but…

SEE ‘Big Brother 20’ spoilers: Who is Kaycee considering for nominations?

Scottie probably thought he was being funny, but absolutely no one was laughing after that. It was all the talk in the house after the HOH comp (some of them didn’t get the Hilton Head double entendre at first). “I don’t know how he thought that would be helpful,” Haleigh said. Angela called it slander and cried. “I feel like [the producers] are going to be pretty upset with him about that,” Tyler said.

Hindsight is 20/20, but Scottie was probably better off not winning the Battle Back if this was going to be his final exit. A week ago, he was the sympathetic weirdo superfan who was targeted by his own alliance member in one of the all-time stupidest moves in history. He got a second chance to play, didn’t change a damn thing and now has offended everyone during his second eviction.