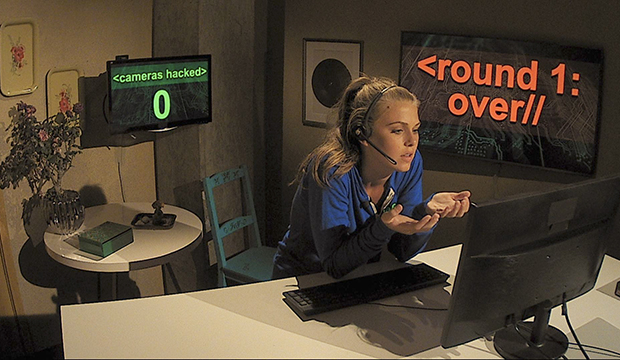 As our Friend Chandler Bing would say, “Could The Hive be more dumb?” The answer is yes. Every week on “Big Brother 20,” we wait for The Alliance Formerly Known as FOUTTE to realize there’s another alliance in the house, but six weeks and five blindsides in, they’re still in the dark — so much so that 67 percent of our readers voted that The Hive is “hopeless” and won’t ever figure it out.

About 9 percent voted that The Hive would realize Level 6’s existence after Week 6, during which Angela used the Veto on Tyler and backdoored Bayleigh. But Week 6 has come and gone, and is now highlighted by Bayleigh’s epic meltdown during Haleigh‘s ill-advised house meeting to reveal herself as the hacker in an effort to save Bayleigh.

That’s the other thing: The Hive makes such nonsensical decisions and screw themselves even when they’re in power. Why didn’t Haleigh pick herself or Faysal for Veto last week when she was the hacker? Why did she expose herself as the hacker and mess up her own game? She secretly put Tyler up as the hacker and now he has a reason to target her.

Some of you are still holding out hope: 24 percent think The Hive will figure it out in the next three weeks. It’s not looking very promising in Week 7 though. HOH Haleigh made the best move she could make, putting up Angela and Kaycee with the intention of backdooring Tyler, but Kaycee won the Hacker Comp and replaced herself with Rockstar.

Tyler then won Veto — which was OTEV! — ensuring his safety and saving his Cloud app for another week. Haleigh, tipsy in the tub, made a godawful pitch to him to use it on Rockstar, because she still thinks Tyler is a free agent and that her side has roped in Brett, who’s just been working his social game hard.

One of Haleigh’s many clueless exchanges with Rockstar this weekend:

Haleigh: I wonder if [Tyler] finds it odd. … Just the way [Angela and Kaycee] are acting.

Rockstar: How they are up his ass?

Haleigh: Or if he even notices.

Rockstar: If he is smart, he would find it odd.

If you guys were smart, you’d realize they’ve been in an alliance since the beginning!

SEE ‘We can’t be stopped!’ Tyler brags on ‘Big Brother 20’ after Haleigh’s HOH reign is hacked by Kaycee

During the Veto ceremony on Monday, Tyler took Angela off and Haleigh renominated Kaycee. Even with Kaycee canceling a vote (probably Fessy’s), The Hive still believes Rockstar has the numbers to stay, under the impression they have votes from Brett, JC and Sam, all of whom for the most part have voted with Level 6 the whole season. Sam, who’s been getting close to Rockstar, has told Tyler she will vote to keep Kaycee. She’s having her own meltdown in the house, so who knows what she will do come Thursday, but even if she flips, The Hive is staring down the barrel of a sixth blindside in seven weeks.