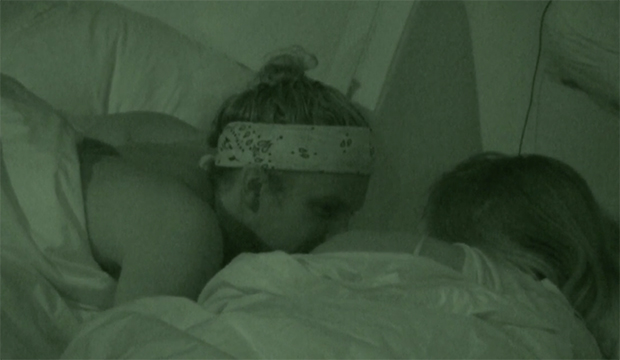 Tyler and Angela have been trying very, very hard to fight their feelings for each other on “Big Brother 20,” but you know what they say: The heart wants what it wants. Tangela’s flirtmance became showmance official on Wednesday night when she dropped the “L” word on him.

Seemingly relieved, Tyler says he thought it was a “one-way street,” thinking she didn’t feel the same way. Angela jokes she thought about telling him she had a 4-year-old just to see his reaction. They’re obviously going to continue to keep it on the down-low, but they made some huge future plans. “We win. And tell the world,” Tyler says.

First of all, Tyler’s reaction to Angela’s confession is flat-out adorable. He is absolutely stunned. It’s the kind of genuine reaction you never get from the boatloads of manufactured and forced showmances. Maybe in two years he too will propose to Angela in the “Big Brother” house.

But we’re getting ahead of ourselves. We still have a game to finish, and if you’re like JC, you think Tyler has been getting distracted by Angela. Now that they’re serious, will his game get even sloppier? But most importantly, is he going to take Angela to final two now over Kaycee? She is not one of his four deals, and both of them have said they won’t have a problem cutting the other despite their burgeoning feelings. But that was before the L-bomb. And “We win” sounds like an agreement to go to the end together. Angela will have a harder time winning in general as is since the jury hates her, but sitting next to Angela might not be a totally bad idea for Tyler because the jury hates her. However, his problem is that The Hive thinks he’s a gullible guy who’s easily manipulated by women, so he’s going to have to make his masterminding crystal clear.