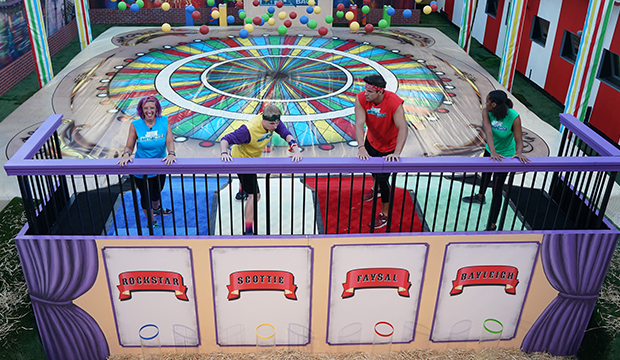 The Hive might be gone from the “Big Brother 20” house, but it is most definitely not forgotten. Formerly known as FOUTTE, the alliance that couldn’t shoot straight gave us some of the all-time dumbest moves this season. Just when you think they couldn’t do anything more inane, they do. It’s like they were actively trying to show us how stupid they could be. But what was The Hive’s dumbest move of all?

Kaitlyn backdoors Swaggy C
This one wasn’t as splashy as some of The Hive’s other moves, but it was the first majorly dumb thing FOUTTE did. Evicting Swaggy C was good for Level 6’s game, and Tyler worked Kaitlyn over to accomplish it. Props to him. But none for you, Kaitlyn. She was so under Tyler’s spell that she couldn’t see that it was way, way too soon — Week 2! — to turn on her own alliance. FOUTTE never recovered from this and Kaitlyn marked herself as a target.

Bayleigh tells Rachel about her Power App
Bayleigh had a game-changing Power App — the ability to secretly overthrow an HOH’s nominations — and told Rachel when she was trying to convince Rachel to let her put her up as a pawn. At this point, Bayleigh’s entire alliance didn’t even know about it; she had only told Faysal. Why would you tell someone on the other side?! Rachel did a lot of things wrong that week herself, but she did one thing right, telling Level 6 about the app. That led to Brett exposing the app to the whole house in his eviction speech. You’d think Bayleigh would use it the following week after Angela won HOH, but she told her she wouldn’t and instead revealed that her power lasts until the final eight and didn’t expire that week like everyone had thought. Again, why would you tell the other side? That just expedited Level 6’s goal to evict Bayleigh before she could use it. But the most tragic/hilarious thing is Bayleigh giving Fessy grief about his own blunder in the jury house without owning how idiotic her move was. “Don’t act like we’re all as stupid as you because we’re not all as stupid as you,” she said. “Telling the opposite side you have a power is pretty stupid, Bayleigh,” he shot back.

Haleigh reveals she’s the hacker in a house meeting
After Bayleigh got backdoored and was suspected to be the hacker, Haleigh felt so bad for her pal that she held a house meeting to do exactly the thing she didn’t want to do when she picked Kaycee instead of Fessy to play the Veto: reveal herself as the hacker. It’s a very nice move as a friend, but it was like she forgot she was playing a game for a second and thought this was summer camp. The meeting led to Bayleigh’s ear-splitting meltdown and made Haleigh a target while making Tyler aware she was gunning him. Had she not held the meeting, she wouldn’t have been on Tyler’s radar and she may have had a chance to get him out since he wouldn’t have been playing defense (as much) with her.

Rockstar tells Tyler the answer in OTEV
Oh, Rockstar, a self-professed “boss ass bitch,” might be the most strategically and socially inept player of all time. When your alliance is outnumbering the other side two to one in the penultimate round of OTEV, you know what you don’t do? You don’t verbally confirm your answer with the person you are trying to knock out. Alas, that’s what she did. Tyler immediately realized he picked the wrong one, went back, got the right one and beat Haleigh to the stump. Rockstar keeps saying that she “showed” Tyler the answer, as if she accidentally flashed her card to him. Keep telling yourself that. She wanted verbal confirmation from him that she had the right answer. Then she compounded the gaffe by bringing back the wrong answer herself in the last round. Sigh. Had she not told Tyler, she or Haleigh would’ve won Veto, Rockstar would’ve come off the block, Haleigh would’ve tried to backdoor Tyler, Tyler would’ve used his Cloud app, Kaycee would’ve gone up against Angela, and Level 6 would’ve lost a member.

Fessy targets Scottie
Look, we don’t expect much from Fessy, but we’d hope anyone with half a brain would know not to go after one of your two alliance members left. JC planted those seeds of jealousy into Fessy very well, convincing him that Scottie was crushing hard on Haleigh (he was) and wanted Fessy out (he wasn’t), and Fessy took the bait. He continued to decimate The Hive’s numbers and The Hive reached a place of no return, even with Scottie’s eventual jury buyback. At least Fessy has realized how terrible this move was and apologized to Scottie immediately when he saw him before the jury buyback comp.