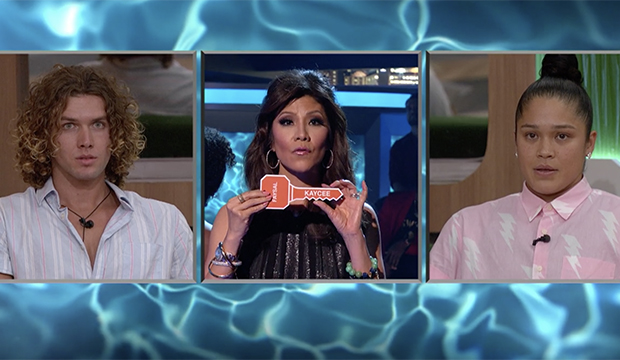 Tyler was up 4-1 in votes on Wednesday’s “Big Brother 20” finale and just needed one more to secure the $500,000. But just like she did in the second half of the game, Kaycee rallied and ended up winning 5-4. Tyler isn’t surprised he didn’t get that final vote from Bayleigh, but he is “a little bit shocked” that two people didn’t vote for him: Scottie and Faysal.

We also thought Scottie and Fessy would vote for Tyler since he was closer with both of them than Kaycee was, but we suspect he lost Scottie’s vote when he revealed he pretended to be close to him. Scottie said in the backyard interviews with Ross Mathews and Marissa Jaret Winokur that he chose Kaycee after she won the final HOH, which probably did play a role, but let’s be real, he was likely also stung by Tyler’s admission, and his “loyalty and respect” remark when he cast his vote was some not-so subtle shade.

Fessy surprised by not voting with Haleigh, whose vote Tyler was “unsure” of but believed he could get, which he did. “I knew she was a superfan, and I knew if was able to explain my gameplay well enough, she would respect that,” he said. Fessy said he picked Kaycee because she won the Veto that sealed his eviction, but he also said it in a way that made it sound like he was salty a girl beat him in a comp that involved catching balls. There’s also the possibility that what Scottie said when he returned to the house was true: There was a FOUTTE/The Hive pact to vote as one, and Haleigh was the only one who thought for herself and didn’t vote emotionally. In any case, Fessy was on the right side of the vote for once!

Tyler said once he lost Fessy’s vote, he knew Kaycee had it in the bag because the last two votes were from Rockstar and Bayleigh, and he “was sure” they would pick Kaycee because she had better personal relationships with them. And you know, one of them didn’t cut her own cheek screaming at Kaycee during a house meeting.

“I really thought Fessy was gonna vote for me and that was gonna be it, but once Fessy did not vote for me, and he voted for Kaycee, I was like, ‘Aw, congrats, Kaycee. You got this,'” he said. “No, I’m not bitter, not mad at all, but once I saw Fess vote the other way I knew that was it. But, man, 4 to 1? You gotta be joking! You gotta be joking, man! 4 to 1? She ran away with it, though. I’m so proud of Kaycee. Kaycee is one of the best people I’ve ever met in my entire life, and she deserves it 100 percent.”

As for Sam, one of this tightest allies in the beginning, Tyler never counted on her vote because of her close bond with Kaycee and her emotional game style. “I knew she played a very personal game. As much as I love Sam, I voted her out,” he said. “She felt betrayed by me, and I knew she was going to take that personally, and I totally get that. I had always calculated Sam voting for Kaycee over me in my head.” (Sam feels so scorned that she said in the backyard interviews she’d vote for JC over Tyler.)

Tyler added that he is not upset over his loss because he always knew that his multiple final two deals and having more blood on his hands could come back to haunt him. “I’m not bitter whatsoever that I lost. I totally get it,” he said. “This is how the game works. I felt like I did everything I set out to do. I cannot be happier with myself or happier with the result, honestly.”