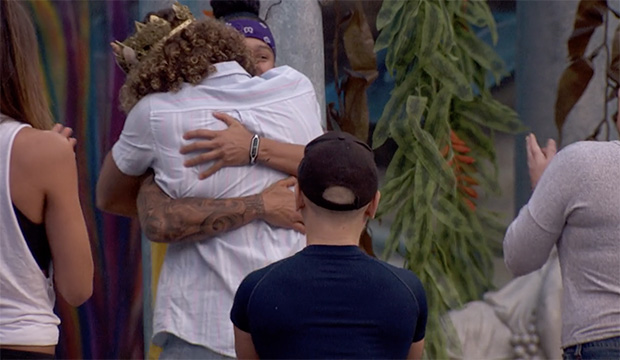 Kaycee has been Tyler‘s No. 1 on “Big Brother 20,” but it’s time for him to cut the cord, our readers believe. In a recent poll, 69 percent said that Tyler needs to ditch Kaycee before final two because she has a very good shot of beating him now.

Kaycee’s position in the house has done a 180 in the past few weeks as she’s emerged as a comp beast with multiple Veto wins and an HOH victory. Tyler has his share of wins as well, so they’re pretty even in that regard, but where Kaycee, at the moment, has a leg up on him is jury management. She is friendly and likable and has no major issues with any of the jurors. To put it another way, the jurors are more likely to be bitter at Tyler than at Kaycee. Just look at Scottie‘s vulgar eviction speech. She’s even gotten super close with Haleigh, her target this week, to secure a jury vote.

But 23 percent think it’s still too soon to say if Kaycee would beat Tyler in the final. If Kaycee continues dominating comps, she could find herself targeted sooner than later. Plus, Tyler could turn it up a notch and put in work in his goodbye messages, mostly for Haleigh, though to explain himself and all he’s done in the game. One of his major problems is that the other side of the house thinks he’s a follower and that other people — Kaitlyn, Angela — have been the heads of the operation.

Meanwhile, just 8 percent think Tyler can still beat Kaycee if he brings her to final two, a sign of just how far our little Peanut has come. If they do wind up in the final together, one advantage Tyler has is being a superfan; he’d know exactly what he needs to say and how to craft his jury answers and speech to best position himself for a win. But after that it’s up to the (bitter?) jury.