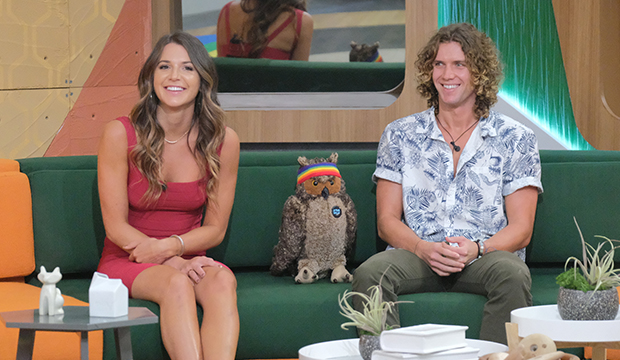 Tyler revealed two big secrets to Angela in his goodbye message on Thursday’s “Big Brother 20”: his final two with Kaycee and his Power App. But there was a third secret he shared with her that broadcast viewers did not see (no, we’re not counting him falling in love with her): He’s a “Big Brother” superfan.

Tyler revealed his superfan status to Angela Wednesday night, telling her that he even made the final round of casting for “Big Brother: Over the Top” and knows the winner, Morgan, and how he struggled to keep his cool when the alums came into the house for Victor and Nicole’s engagement. “You know how much I was freaking out when everyone came in here for the proposal? I had to act like I didn’t know some of them,” he said. “Were you fangirling hardcore?” Angela asked. Tyler: “Yeah.”

The secret may not seem like that big of a deal in the grand scheme of things, but it shows that Tyler is prepping Angela to advocate for him in jury. He played off being a naïve surfer dude who’d never seen “Big Brother” before so well that everyone believed it, and The Hive thinks he doesn’t know what he’s doing and was just following orders. Even Angela was impressed by his lying/acting abilities.

“When you asked JC how it all ended, you knew exactly how it ended?” she said. “You are a good liar.”

Tyler knows the perception The Hive has of him, and how bitter they could be in jury, so he needs all the help he can get to dispel it before he even gets a chance to give a final speech explaining everything he did and why he should win. The only other person who knows he’s a superfan is Sam, who 1) likely won’t tell anyone, 2) probably doesn’t even know what that means, 3) or why it matters. Now armed with Tyler’s trio of secrets, Angela can vouch for Tyler’s gameplay and explain his moves in the context of him being a fan and being knowledgable about the game, not just someone who got lucky and stumbled into being on the winning side.

Since Sam is already a juror, she could also back up Angela if no one believes her about Tyler being a superfan. And Brett, even though he doesn’t know Tyler is a die-hard “BB” lifer, could also confirm that Tyler was an active schemer within Level 6.

This doesn’t mean Tyler being a superfan will sway the jurors into voting for him, but he’s thinking ahead and laying the groundwork to set himself up in the best position to win.