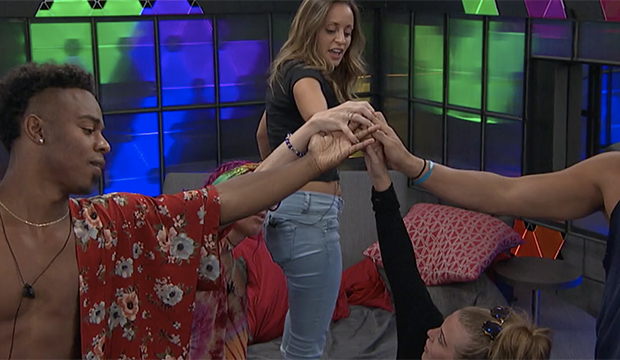 Alliances are an important part of “Big Brother.” They can make your game or hurt your game, but you almost certainly can’t make it deep without an alliance of some sort. And just as important as the alliance itself is the name. We’ve been some great, hilarious and hilariously ironic ones over the years, but we now have the worst one ever on “Big Brother 20”: FOUTTE.

The house is split into two sides right now. In one corner are Angela, Brett, Winston, Kaycee, Rachel and Tyler, who make up Level Six. Not the most inspired moniker, but perfectly serviceable. In the other corner, we have Rockstar, Swaggy C, Faysal, Haleigh and Kaitlyn. Their combined brain cells could only generate the tragic FOUTTE (pronounced “foul-tay”), which stands for “five of us ‘til the end.”

“That’s not going to work for me,” Faysal said in the Diary Room. “But then I’m thinking in my head, do I have anything better? And no, I don’t. So it looks like we are going to be called FOUTTE.”

SEE ‘Big Brother’ twist: How to use the CBS Messenger Bot on #BB20

Someone should tell them it’s actually spelled D-U-M-B-A-F. First of all, if you can’t even pronounce your name, you shouldn’t use it. Secondly, you can come up with something that doesn’t sound like a French foot cream. Third, someone please tell these geniuses that you don’t need to abbreviate articles and prepositions (like “the” and “of”) in the acronym. But we probably shouldn’t expect too much from people who thought there was an “H” in there.

Look, not all alliance names can be Chilltown, but do better, guys.