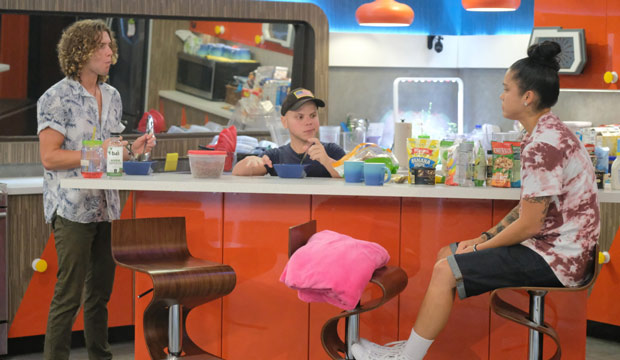 After 99 days, countless blindsides and showmances galore, Season 20 of “Big Brother” finally came to an end on Wednesday, September 26. Which of the Final 3 became the last member of the bitter jury and who was named the winner of the $500,000 grand prize: lifeguard Tyler Crispen, professional dancer JC Mounduix or football player Kaycee Clark? Gold Derby’s racetrack odds predicted that Kaycee would win, but with three parts of the final Head of Household competition still on the line, it was truly anyone’s game.

Below, check out our minute-by-minute “Big Brother” recap of Season 20, Episode 40 to find out what happened Wednesday, September 26 at 9:30/8:30c. Then be sure to sound off in the comments section about your favorite houseguests on CBS’s reality TV show, who annoys you the most, and what you think of this latest edition to the “Big Brother” winners list. Keep refreshing/reloading this live blog for the most recent updates.

SEEBreaking down the ‘Big Brother 20’ jury votes: Who will be the most bitter of them all?

9:30 p.m. — “Previously on ‘Big Brother’!” In Sunday’s episode the Final 3 toasted to their memorable summer with fan fave Jeff Schroeder. The players then took to the backyard to begin Part 1 of the Head of Household competition. The rules are simple: whoever rides their prototype spaceship the longest will win this endurance battle and advance directly to the third part. How will all three HOH parts play out, and who will win “Big Brother” 20? Let’s go!

9:40 p.m. – Tyler told Kaycee he would throw the first half of the HOH to her, but now he’s second-guessing himself. Is this really time to be throwing anything? The houseguests are each holding on to their spaceships for dear life when they start being shot with some gooey guck to make things worse. After more than 54 minutes, JC is the first to drop. Kaycee is about to fall and starts calling for Tyler to drop, but he won’t. Finally, after 56 minutes, Kaycee crashes to the mat. Tyler has won the first round of tonight’s epic HOH battle.  Kaycee is annoyed, but is determined to destroy JC in round two.

9:50 p.m. – It’s time for part two of the final HOH competition! Kaycee and JC will have to program a laser to carve faces in “Mount Evictus.” They do this by scaling a wall to place houseguests’ names onto it. This definitely seems like a task that should favor Kaycee. Let’s see how this goes! After nailing the first question, Kaycee really screwed up the second one. It took numerous attempts and she wasted a lot of time. Next, JC is trying to beat Kaycee’s time. He’s actually a pretty good rock climber, but is having a little too much fun. This is do or die, JC! He’s making good time until question #3 which is really tripping him up. The competition is finally complete and Kaycee won by just 40 seconds! If Tyler and Kaycee keep their pact, JC is officially screwed.

9:53 p.m. – It’s time for “Big Brother” legend Dr. Will Kirby to sit down with the jury and moderate some debate over who deserves to win. This banter is always fun to listen to. The jury currently has eight members: Bayleigh Dayton, Rockstar Lantry, Faysal Shafaat, Scottie Salton, Haleigh Broucher, Brett Robinson, Sam Bledsoe and Angela Rummans.

10:00 p.m. – Most of the jury is shocked to see Angela join them, but even more shocked to learn JC won a HOH. Angela brings numerous bits of information, including the fact that Kaycee and Tyler had a final two deal since Day 2. That’s news to Sam, who made a final two deal with him on Day 3. Angela also exposed the Level 6 alliance, which apparently nobody was aware of. Angela says Kaycee has ridden Tyler’s coattails to get this far. Angela is campaigning hard, stating Kaycee didn’t make the moves, she just followed them. She’s really throwing Kaycee under the bus. Haleigh defended Kaycee saying that she never needed to use any of her vetoes. Bayleigh takes it a step further saying, “maybe her ‘big move’ was stringing your ass along, letting you take all the hits, and then voting your ass out.” Oh how I miss Bayleigh. Rockstar thinks Kaycee floated and she actually wants JC to win. She believes he was a strategic, brainwashing genius and Sam, Scottie and Fessy agree. Most of the jury believe Tyler has played a great game, but some have a sour taste in their mouth when it comes to him. Bayleigh says some of the best “Big Brother” players are evil, so she respects him. At this point, the jury seems to be strongly favoring Tyler.

10:13 p.m. – For the last time this season, the power is up for grabs! Kaycee and Tyler are facing off in the final round of the HOH. They will have to remember details of the season and review statements from each eight members of the jury. After Julie’s questions, whoever has the most wins will be the final HOH. After the eight questions, Kaycee and Tyler tied with a score of 6/8. It’s time for a tie break! In seconds, how long was the “Jet Pack Attack” competition from the official start, to when Kaycee made contact with the ground, making Tyler the winner? The correct answer was 3,413 seconds. Kaycee guessed 3,400 seconds to become the final HOH! WOW! Did she study that or is she just a genius? Will she honor her summer-long deal with Tyler? Or will she deliver the biggest blindside of the summer?

10:20 p.m. – Does Kaycee even realize she can win in an absolute landslide if she just throws the hammer down and sends Tyler packing? I would love the drama of it all, but I don’t see it happening. And she could be signing over a $500,000 check to Tyler in the process. Or perhaps the jury will respect her decision enough to crown her the champ? JC tells Kaycee she’s going to be at risk if she takes Tyler with her to the end. Kaycee has clearly already told JC he is being evicted, and Tyler throws in a little guilt Kaycee’s way if she doesn’t follow through on their deal. Kaycee walks to the front of the living room to cast the final eviction vote of the summer. JC has been evicted from the “Big Brother” house and will become Juror #9.

10:22 p.m. – Julie Chen asks JC if Kaycee just made a half-million dollar mistake? JC says he needs to calm down a little bit because he drank too much coffee, and he needs to think more about it. Well, we’re about to find out! Jury interrogations are next! Whether you’re cheering for Kaycee or Tyler, nobody should even try to argue one of these two isn’t a deserving winner. They both played incredible games and whoever the jury deems the victor is deserving of the title.

10:35 p.m. – The jury is live on the stage and about to find out JC is joining them. Julie reveals Kaycee became the final HOH, which impresses the jury. It’s now time for their questions. Kaycee basically emphasized her relationship-building skills with each and every question. Tyler rattled off that he was more of a string-puller. Both were pretty well-spoken, but I give the slight edge to Tyler due to the fact that Kaycee basically answered every question with the exact same response.

10:45 p.m. – Kaycee and Tyler now give their final pleas to the jury. Kaycee’s final speech was mostly uninspired, in fact the jury looked bored during it. She finished off with “Let’s Go!” which they did seem to like. On the flip-side, Tyler seemed a little unlikable with his “I’m smarter than you” way of speaking to the jury, but he had way more substance. Now…the jury votes! You would think they would make it easier for the jury to place their keys in the voting block. It’s like they’re performing surgery trying to sneak their keys in without them being viewed by the audience. I feel like Kaycee made a $500,000 mistake and by the look on her face, I think it is sinking in for her too.

10:52 p.m. – Early evictees Steve Arienta, Chris ‘Swaggy C’ Williams, Winston Hines, Kaitlyn Herman and Rachel Swindler join the rest of the cast on stage. Julie runs down all the showmances in the house and it appears as though all three are still in tact. Great. And then, Swaggy proposed to Bayleigh after knowing her for 23 days! What!?!? This is insane, but she accepted! Wowza.

10:59 p.m. – Kaycee isn’t the only winner tonight! Viewers have been voting all week for their favorite houseguest. The top three vote-getters were Haleigh, Brett and Tyler. The winner is…Tyler! He gets $25,000 to go along with his $50,000 second-place prize. Tyler bursts into tears saying, “I thought America hated me.”  That’s a wrap for Season 20! Julie announced they will be back this winter for “Celebrity Big Brother” and next summer for Season 21.

Here are the answers to Gold Derby’s contest questions for “Big Brother” 20: Finals:

Who will place 2nd? Tyler Crispin

Who will place 3rd? JC Mounduix