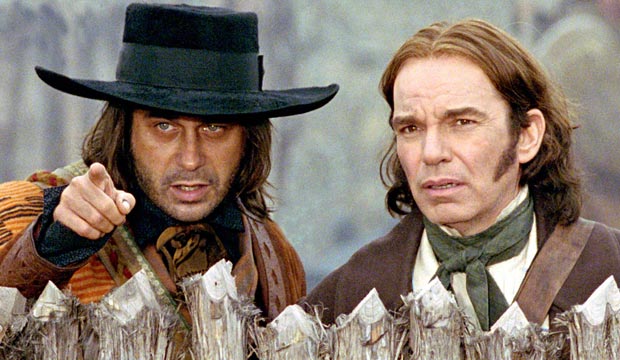 Billy Bob Thornton has returned to TV with the premiere of the second season of “Goliath,” the Amazon Studio’s legal series, for which Thornton won the Golden Globe as Best TV Drama Actor. As Billy McBride, a dishonored lawyer who has a grudge against his old law firm and gets his vengeance against them in Season 1, he now seeks exoneration for the son of a friend (Lou Diamond Phillips) who is being set up on a murder charge.

Although Thornton’s television work has been limited, he is no stranger to TV awards, having won another Golden Globe for his work in FX’s limited series “Fargo,” as well as an Emmy nom and a nomination from the Screen Actors Guild.

Still, his great fame has been his work in films, having won an Academy Award for his screenplay for 1996’s “Sling Blade,” as well as Oscar nominations for his performances in both “Sling Blade” and 1998’s “A Simple Plan.” In addition to his two Golden Globes for television, he has been nominated for four additional Golden Globes, as well as four Screen Actors Guild Awards, including his win for “Fargo.”

Let’s look back at his 12 greatest performances in the movies, including the films above plus “Friday Night Lights,” “Monster’s Ball” and “Bad Santa.” Tour our photo gallery above, ranked from worst to best.

12. THE ALAMO (2004)
John Lee Hancock‘s “The Alamo” was an attempt to tell the story of the famous battle from both the Mexican and American sides. Mexican General Santa Anna (Emilio Echevarría) also plays a much larger part in Hancock’s version than in the 1960 John Wayne epic. While the 2004 film received mixed reviews, Thornton’s performance as Davy Crockett received the lion’s share of the notices, as he portrayed Crockett as a bit of a scamp, a far cry from the earnest portrayal by Fess Parker in the Disney series.

11. BAD NEWS BEARS (2005)
In Richard Linklater‘s reboot of the 1976 original, Thornton plays Morris Buttermaker, an over-the-hill drunk who was thrown out of the major leagues for attacking an umpire. He finds himself reduced to coaching a children’s baseball team that has zero skills. However, when a couple of troublemakers join the team, which all of a sudden begins winning games, Buttermaker decides that life is worth living after all.

10. BANDITS (2001)
Thornton and Bruce Willis play escaped convicts in Barry Levinson‘s film who begin a series of bank robberies together. Their success at robbing banks soon lands them on the FBI’s 10 Most Wanted List, and they achieve a kind of folklore notoriety. However, Kate (Cate Blanchett), a housewife who stumbles into their plans, threatens to tear the team apart.

8. LOVE ACTUALLY (2003)
Love it or hate it (personally speaking, I’m in the love camp), Richard Curtis‘ all-star Christmas romance echoes the multi-story films of Robert Altman, as the film sets up a roundelay of romantic subplots. Thornton is not involved in the romance stuff but plays instead the President of the United States who must deal with Hugh Grant‘s UK Prime Minister. Watch Thornton’s face at a press conference at which Grant’s PM stands up for the UK.

7. THE MAN WHO WASN’T THERE (2001)
In one of the Coen Brothers‘ lesser-known films, Thornton stars as Ed Crane, a barber in Santa Rosa, CA in 1949. When given the chance to invest in a new process called dry cleaning, Ed tries to raise the buy-in fee by blackmailing the boss (James Gandolfini) of his wife (Frances McDormand) with whom he is having an affair.

6. BAD SANTA (2003)
One of the great anti-Christmas Christmas movies, “Bad Santa” provided Thornton with a great platform for his take on a larcenous alcoholic Santa Claus. Along with this dwarf partner Marcus (Tony Cox), Thornton’s Willie T. Soke is a thief who masquerades as Santa every year (with Marcus as his elf) to rob shopping malls at night. Things don’t go as planned.

5. A SIMPLE PLAN (1998)
Thornton portrayed the socially challenged Jacob Mitchell, who joins with his brother Hank (Bill Paxton) in discovering a crashed airplane that contains $4.4 million in cash.  For his performance as Jacob, Thornton was nominated for his third Academy Award, his third Screen Actors Guild Award and his first Golden Globe Award.

4. ONE FALSE MOVE (1992)
This was the one that made Thornton a star, as Carl Franklin‘s indie crime thriller about a killing-gone-wrong was intended to go straight-to-video. Given great word-of-mouth and critical raves, it got a wider audience and introduced audiences to Thornton’s unique take of Southern-fried charm.  And the fact that he co-wrote this career-making script is yet another feather in his cap.

3. FRIDAY NIGHT LIGHTS (2004)
Peter Berg‘s acclaimed 2004 sports drama gave Thornton a juicy role as Gary Gaines, the real-life coach of an Odessa, TX high school football team, the Permian High School Panthers. The drama of Coach Gaines’ personal life (thanks to Thornton’s perceptive performance), plus the struggles of his team, made for a gripping drama (based on the book by H.G. Bissinger) that was turned into an Emmy-winning NBC TV series.

2. MONSTER’S BALL (2001)
Because of the history-making nature of co-star Halle Berry‘s Oscar-winning performance, many people forget just how good that Thornton was in Marc Forster‘s movie. He plays Hank, a widowed corrections officer, who has to deal with his ailing father Buck (Peter Boyle) and whom he calls his “weak” son, fellow corrections officer Sonny (Heath Ledger), who commits suicide after dealing with an especially barbaric execution.

1. SLING BLADE (1996)
Thornton cemented his film reputation with the writing/directing/starring achievement that is 1996’s “Sling Blade.” He plays Karl Childers, an intellectually disabled man who, placed in a mental hospital for killing his adulterous mother and her lover, finds himself released to the outside world, a challenging environment of which he knows little. For his performance as Karl, Thornton earned his first Best Actor Oscar nomination, and his second nomination from the Screen Actors Guild, and for his screenplay he won his first Academy Award.