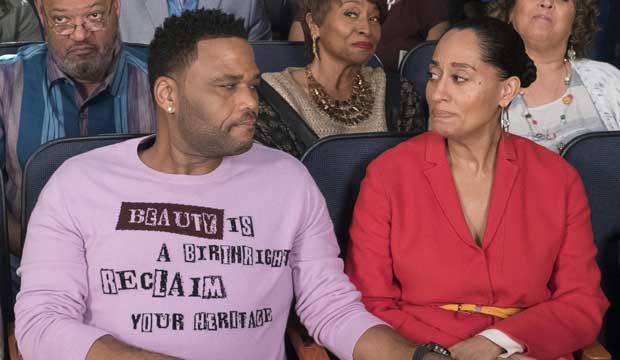 After four TV seasons, this could finally be the big year at the Emmys for “Black-ish” with overdue wins for Tracee Ellis Ross and/or Anthony Anderson.

That’s because automatic past winner “Veep” is not in the running now because it didn’t air new episodes during the eligibility period. That clears the way for “Black-ish” to compete in a serious way for Best Comedy Series and Tracee Ellis Ross, perhaps, to claim the Best Comedy Actress crown. If those things don’t happen now, they probably never will considering the fierce grip “Veep” has had on both categories, claiming Best Comedy Series for the past three years and Best Comedy Actress for Julia Louis-Dreyfus for six consecutive years. In 2019, “Veep” will be back.

Anthony Anderson has a serious chance to win, too, especially if there’s a “Black-ish” sweep, but he faces a tough rematch against Donald Glover (“Atlanta”), that uber-hipster who won both Best Comedy Actor and Director last year. According to Gold Derby’s official racetrack odds, Glover is poised to do the same again.

Tracee Ellis Ross has much better odds (9/2) in the comedy actress matchup. According to our Experts’ predictions, she’s in second place behind Rachel Brosnahan (“Marvelous Mrs. Maisel”), who has a substantial lead. Fourteen Experts pick Brosnahan to win, but two hold out for Ross: Ben Travers (Indiewire) and me.

SEE Emmy spotlight: ‘Black-ish’ could celebrate ‘Juneteenth’ with breakthrough nominations for its most ambitious episode

• Tracee Ellis Ross deserves to win the Emmy because she gave TV’s most devastating performance this year as her character struggled to save her marriage and her sanity. Meantime, her dad died, too, adding to the trauma Rainbow must endure and adding powerful dimensions to a performance already poignant, ferocious, warm and always empathetic. Her hubby Dre can often be a self-absorbed jerk, yes, but Rainbow always beams with class, love, kindness and quiet heroism.

• Ross is beloved across Hollywood where many people believe it’s high time we all gave her the awards respect she deserves. Also, voters may be tempted to give her a hug as esteemed family member (daughter of Diana Ross). Remember who votes for these awards: showbiz veterans toiling in the TV industry. If peer-group showbiz awards are about bestowing hugs – and they are – then Ross may be ready for a family embrace that salutes her impressive TV work and earns her a place in the history books.

• It’s time. Only one African-American has ever won Best Comedy Actress — 37 years ago: Isabel Sanford (“The Jeffersons”).