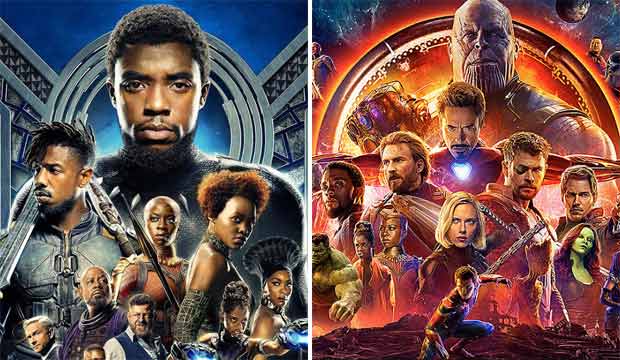 “Black Panther” looked like the movie to beat at the MTV Movie and TV Awards when the nominations were announced. It picked up seven bids, more than any other movie or TV show. But it faces a unique challenge in the race for Best Movie: it’s up against the film that immediately followed it in the Marvel Cinematic Universe, “Avengers: Infinity War.” That film just opened on April 27, which means it will be fresher in mind for fans as they vote online for the winners. So who will take the prize? We’ve asked our readers who will win and who should win, and it’s a split decision.

“Black Panther” will win according to Gold Derby users who have entered their predictions in our predictions center thus far. It gets leading odds of 5/6 based on our combined forecasts. That includes support from 19 of our Top 24 Users who got the highest scores predicting last year’s MTV Movie and TV Awards, as well as an overwhelming 22 of our All-Star Top 24 who got the highest scores when you combine the last two years’ MTV predictions. It’s also backed by three Editors who cover awards year-round for Gold Derby: Chris Beachum, Joyce Eng and myself.

But not so fast. According to our poll asking which film our readers are actually rooting for, “Avengers” came out ahead — barely. 35% of our respondents say it deserves to win, while 31% are hoping “Black Panther” takes top honors. Those results could be telling. Since the MTV Movie and TV Awards are decided by fans, this poll might suggest we’re underestimating “Avengers” in our predictions. There is already precedent: the first “Avengers” won three awards in 2013 including Best Movie. What’s more, a vote for “Avengers” could also be seen as a vote for “Black Panther” since the characters from “Panther” are featured in “Infinity War.”

Who do you think will win? Check out our poll results below, and make your predictions here. 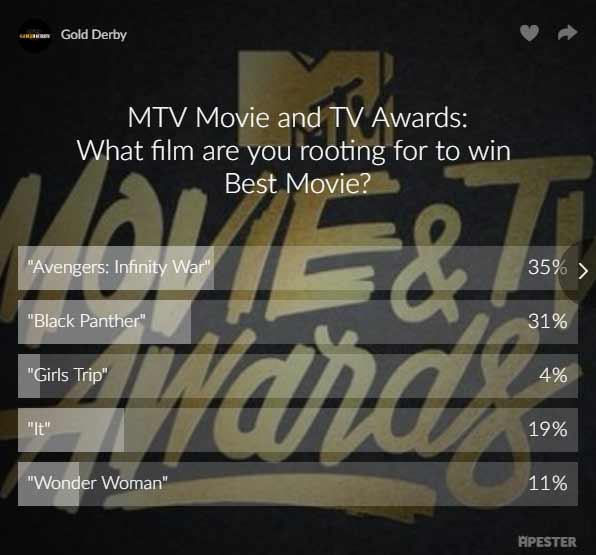 MAKE YOUR PREDICTION: Who will win Best Movie?
To save your prediction, you must log in to Gold Derby. Click here to sign in with existing account -- or create a new one.
PREDICTthe MTV Movie and TV Awards now; change them until June 18