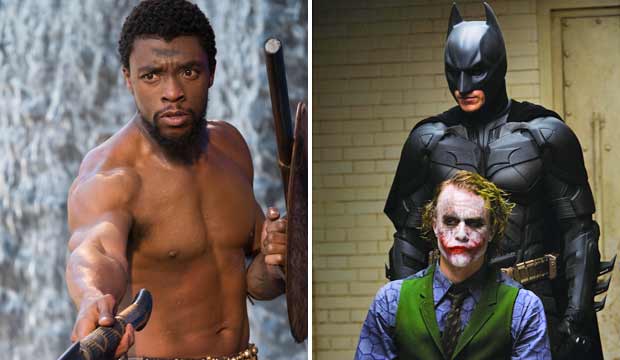 It’s looking more and more like “Black Panther” will achieve a historic Oscar breakthrough for superhero movies. According to the combined predictions of thousands of Gold Derby users, it will be nominated for Best Picture. That’s something “The Dark Knight” couldn’t manage to do 10 years ago. But will “Black Panther” beat “Dark Knight” in total nominations? Christopher Nolan‘s 2008 Batman drama earned eight bids and won two.

“The Dark Knight” wasn’t nominated for Best Picture despite achieving the rare combo of critical acclaim and box office success. That snub was so controversial that the academy expanded that category to 10 nominees the very next year. But even though it was shunned from the top race, “Dark Knight” was still nominated for Best Cinematography, Best Film Editing, Best Art Direction, Best Makeup, Best Sound Mixing and Best Visual Effects, and it won Best Supporting Actor (Heath Ledger, posthumously) and Best Sound Editing.

As of this writing our odds say “Black Panther” will do better — slightly. We’re currently predicting nominations for the film in nine categories:

But there’s a chance “Black Panther” could do even better than that. It’s on the bubble for nominations in five other races:

SEENo film has won acting and stunt ensemble prizes at the SAG Awards — can ‘Black Panther’ do it?

If it manages nominations in all those categories too, that would bring its total for the year to 14, tying the all-time record shared by “All About Eve” (1950), “Titanic” (1997) and “La La Land” (2016). That will be a tall order, but it’s not out of the realm of possibility. It has nearly that many bids (12) at the Critics’ Choice Awards.

But will “Black Panther” actually win anything? As you might have noticed above, the film is predicted to be nominated nine times, but we’re not ranking it first in any category. It’s close, though, ranked second in six races. We could be underestimating it; technically audacious films with big budgets often clean up below the line even if they don’t win Best Picture, like “Inception” (2010), “Hugo” (2011), “Gravity” (2013) and “Mad Max: Fury Road” (2015).

How do you think “Black Panther” will do relative to “The Dark Knight”? Vote in our poll below to let us know.