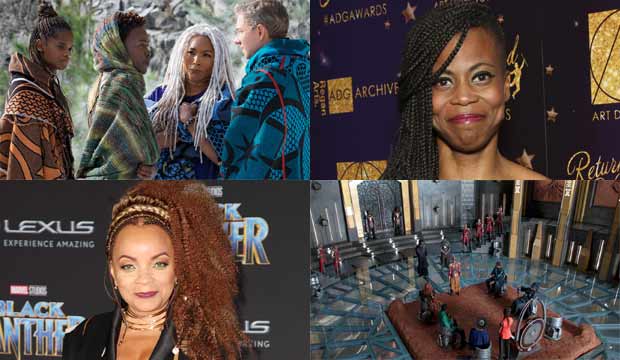 “Black Panther” has received abundant praise, including for its wide-ranging, multi-dimensional female characters who get to drive the story and don’t just exist to motivate male characters. I echo all those sentiments about warrior Okoye (Danai Gurira), spy Nakia (Lupita Nyong’o), scientist Shuri (Letitia Wright) and queen Ramonda (Angela Bassett). But I was just as excited as the end credits rolled to see that Marvel and director Ryan Coogler put their money where their mouth is by hiring women in prominent roles behind the scenes, and I don’t think it’s too early to highlight their accomplishments as worthy awards contenders for 2018.

The film is distinguished by its excellent cinematography, production design, costume design, makeup and hairstyling, and editing, and while it’s still too early to anticipate how this film will compare to the rest of 2018’s films I can safely say “Black Panther” would be worthy of Oscar nominations in those fields in most years. I hope industry guilds and Oscar voters have them in mind now and keep them in mind at year’s end.

The cinematography is by Rachel Morrison, who already made history this year with “Mudbound” as the first woman ever nominated by the American Society of Cinematographers for a feature film, and the first woman ever nominated for Best Cinematography at the Oscars. In “Black Panther” she helps capture the sprawling vistas of the fictional nation of Wakanda and a mystical realm where kings meet their ancestors, among other memorable visuals.

Production designer Hannah Beachler excels in her world-building, blending the technological advancement of Wakanda with traditional African influences, which is especially evident in the interior of Shuri’s science lab. Beachler previously worked on “Miles Ahead” (2015), “Creed” (2015) and “Moonlight” (2016), and she earned a 2016 Emmy nomination for her work on Beyonce‘s “Lemonade.” No black production designer has ever been nominated for an Oscar, though, let alone a black woman.

Two-time Oscar nominee Ruth E. Carter (“Malcolm X” and “Amistad”) is the costume designer and her work is equally detailed in its blend of traditional and ceremonial garb with modern and futuristic creativity. And the makeup and hairstyling completes the looks that fully immerse the actors into their roles. Camille Friend is the head of the hair department and Jaime Leigh McIntosh was the key hair stylist; Friend was a 1997 Emmy nominee for “3rd Rock from the Sun” and a stylist on films including “The Hateful Eight” and “Guardians of the Galaxy Vol. 2,” while McIntosh is a current nominee at the Make-Up Artist and Hair Stylist Guild Awards for “Blade Runner 2049.” The makeup designer is Joel Harlow, a previous Oscar winner for “Star Trek” (2009) and a nominee for “The Lone Ranger” (2013) and “Star Trek Beyond” (2016); he’s male, but we won’t hold that against him.

The editing is by Debbie Berman and Michael P. Shawver. Berman’s past credits include “Spider-Man: Homecoming” (2017), while Shawver edited Coogler’s “Fruitvale Station” (2013) and “Creed” (2015).

So while “Black Panther” has been breaking records and resetting industry expectations for black-centered films, so too is it a showcase of female excellence on both sides of the camera. It will hopefully encourage Hollywood to hire more women and the Oscars to nominate more women.