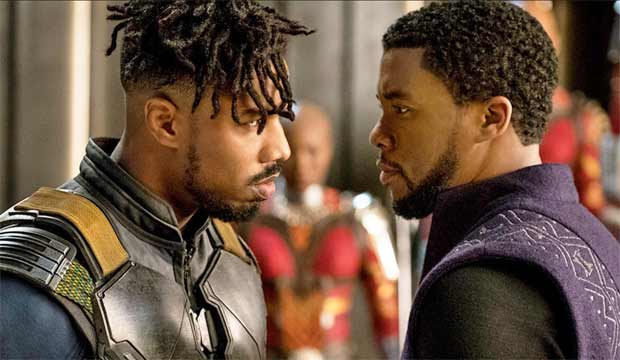 “Get Out” was released in February 2017, and despite being an unconventional awards contender — a satirical horror film from a director with a sketch comedy background — it ended up with four Oscar nominations including Best Picture. Now comes “Black Panther,” which opened on February 16. It too is an unconventional awards contender — a Marvel superhero movie — but its reviews are even better than “Get Out” (87 on MetaCritic compared to 84 for “Get Out”), and it has an awards-friendly pedigree with director Ryan Coogler (“Fruitvale Station,” “Creed“) and actors like Chadwick Boseman (“Marshall”), Michael B. Jordan (“Fruitvale” and “Creed”) and Lupita Nyong’o (Oscar winner for “12 Years a Slave”). Can it score a Best Picture nomination when previous acclaimed films like “The Dark Knight” (2008) and “Wonder Woman” (2017) couldn’t?

It’s possible, if the reviews are any indication. It’s the 18th film in the Marvel Cinematic Universe, and it’s by far the best reviewed. But it’s not just considered a superior comic-book movie, it’s “groundbreaking” and “revolutionary.” It’s a “remarkable feat of world building,” “lush” and “impressively well-acted,” and it “dazzles.” It’s “unlike anything we’ve seen” from the genre and directed by Coogler “with the confidence of a far more experienced filmmaker.”

Check out some of the reviews below, and scroll down to vote in our poll. How do you think the film will do at the next Oscars?

Jamelle Bouie (Slate): “‘Black Panther,’ the latest entry in Marvel’s shared cinematic universe, is a remarkable feat of world building and visual craft. Its setting, the fictional central African nation of Wakanda, is a technologically advanced wonderland … unlike anything we’ve seen from Marvel Studios or the superhero genre at large.”

Kristen Yonsoo Kim (Village Voice): “It’s a great relief to confirm that ‘Black Panther’ is genuinely worth rooting for, a clear standout on Marvel’s roster — and certainly on track for box-office success. It’s only Ryan Coogler’s third feature … but ‘Black Panther’ is executed with the confidence of a far more experienced filmmaker.”

Ann Hornaday (Washington Post): “This lush, impressively well-acted film … comes draped in anticipation … Director Ryan Coogler, working with a script he co-wrote with Joe Robert Cole, doesn’t just meet but exceeds those expectations, delivering a film that fulfills the most rote demands of superhero spectacle, yet does so with style and subtexts that feel bracingly, joyfully groundbreaking.”

Alex Abad-Santos (Vox): “Coogler and his talented cast and team tell a story that dazzles, one that dares its audience to dream of a world unrestrained by our own stifling reality, without ignoring how the pain of the real world informs those joyful dreams. Similarly, its invitation to audiences to imagine themselves as kings, queens, geniuses, and warriors, unapologetic in their beauty and joy, feels revolutionary.”