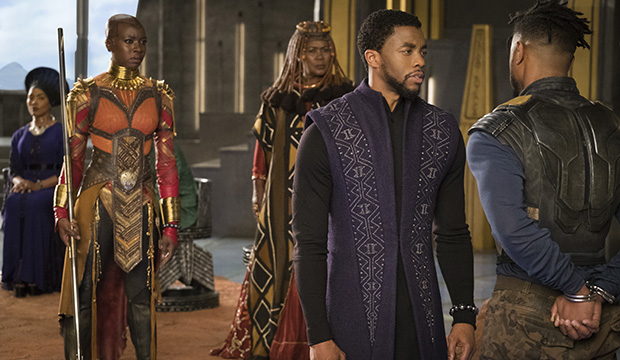 From its record-breaking U.S. box office haul of $700 million to its cultural relevance, no film captured the zeitgeist this year more than Ryan Coogler’s “Black Panther” did. It’s not often that we see a comic book movie pop up in the awards conversation, but “Black Panther” might be the game-changer. One of its best shots to stand at the podium is at the Screen Actors Guild Awards, where its ensemble is looking to win the top prize from the SAG voters. And yes, it can really do it. Here’s why:

2. TV crossover stars
“Black Panther” features many current TV stars: Bassett (“9-1-1”) Brown (“This Is Us”), Gurira (“The Walking Dead”) and Freeman (“Sherlock”). Wright also got an Emmy nomination this year for her episode of “Black Mirror.” TV pedigree bolsters a cast’s chances since the SAG voting body includes both film stars and TV actors. The cast also includes veteran actors who’ve worked with many people in the industry over the years, which is important when you have peers voting for peers.

SEE Chadwick Boseman: After all those biopic snubs, could his first Oscar nom come for a superhero?

3. Its relevance and appeal
In today’s political climate, it’s exactly the movie people need: it’s a crowd-pleaser with a nearly all-black cast that highlights African culture while providing the escapism we all look for in movies. Even non-comic book fans may find pleasure in the movie, as it contains fully realized, complex and layered characters, and at its core is more of a tragic family drama than a simplistic superhero film. The fact that the movie is still being talked about nine months after its release speaks volumes about its impact.

4. It’s a critical and commercial success
“Black Panther” is the highest-grossing film by a black director, the third highest-grossing film in U.S. history and the ninth highest-grossing film of all time. Not to mention, it received an excellent A+ CinemaScore and glowing reviews from critics. It’s a movie that has a real rooting factor and one that the industry may want to recognize for its impact alone; rewarding the cast with the ensemble prize at SAG seems like the perfect place to do so.

Even if “Black Panther” doesn’t end up being a frontrunner to win Best Picture at the Academy Awards, it can walk away with the top prize SAG. In fact, the last two winners — “Three Billboards Outside Ebbing, Missouri” (2017) and “Hidden Figures” (2016) — ended up losing Best Picture to “The Shape of Water,” which wasn’t even nominated for Best Ensemble at SAG, and “Moonlight,” respectively. Two of last year’s Best Ensemble nominees, “Mudbound” and “The Big Sick,” didn’t even make the Best Picture lineup at the Oscars. Bottom line, the ensemble nominees and winners at SAG don’t necessarily correlate with the Best Picture race at the Oscars.

In our combined SAG odds, Black Panther is in sixth place with 13/1 odds, while the projected nominees are “The Favourite,” “A Star Is Born,” “Widows,” “Vice” and “If Beale Street Could Talk.”

Do you think “Black Panther” can pull off a SAG Awards win for its ensemble? Make sure to let us know in the comment section below.

Be sure to make your SAG Awards predictions so that Hollywood insiders can see how their films and performers are faring in our odds. You can keep changing your predictions until just before nominees are announced on Dec. 12. And join in the fierce debate over the 2019 SAG Awards taking place right now with Hollywood insiders in our movie forums. Read more Gold Derby entertainment news.