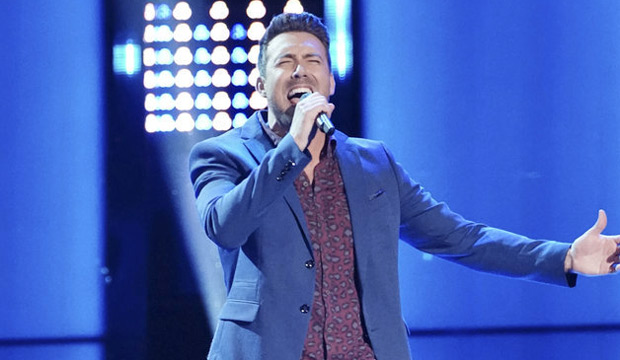 During Monday’s episode of “The Voice,” Adam Levine paired up Delaney Silvernell and Steve Memmolo in the latest knockout round of Season 15. Delaney performed Kesha‘s “Praying” in front of the four reality TV coaches while Steve blew the roof off of Allen Stone‘s “Unaware.” In the end Adam chose to keep Steve for his team, but not before getting into a fight with rival coach Blake Shelton about Steve’s physical resemblance to Ben Affleck. Read the coaches’ comments below.

“I just saw ‘Armeddon’ over the weekend and I’m freaking out a little bit,” Blake told Steve after his performance. When Adam fired back, “There’s so many stars in ‘Armageddon’ — that’s a bad choice,” Blake quickly responded that “there’s only one that looks like Ben Affleck and it’s the guy on the freaking stage. He didn’t think I was referring to him as Bruce Willis or Liv Tyler. He knew I was talking about Ben Affleck. He looks like Ben Affleck!”

Critiquing the performances of his two artists, Adam explained, “We worked really hard on both of these. Delaney, what holds you back ever is just something in your head that is making you think that you can’t do this, but you can. Steve, once you committed to that falsetto stuff you hadn’t been particularly comfortable with it until I think today. You really have me proud of your ability to have gone to that place. You had to show a tremendous leap of faith in your own ability as well and I think that you really did. It’s tough. I’m gonna make this call based on who I think is ready right now. The winner of this knockout is Steve.”

SEEKennedy Holmes’ powerful ‘What About Us’ cover wows Jennifer Hudson during ‘The Voice’ knockouts, so she cuts Anthony Arya

In his “The Voice” live blog, our recapper John Benutty had this to say about the knockout: “While Delaney did let her song start on a slower beat, she quickly erupted into the bright loudness of the chorus and showed that she can fill the room with her voice. I do think she lacked the connection to the lyric, especially for a song that personal, and so she never lifted it to where it should be. Steve, on the other hand, kept his performance right in the zone throughout and injected soul and groove into his raspy vocal and a lively stage persona.”