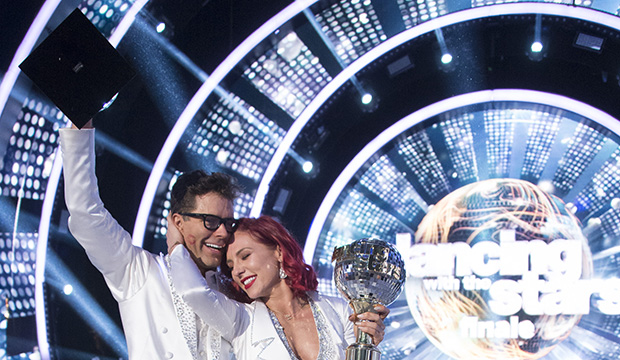 Bobby Bones knows to quit when he’s ahead. The “Dancing with the Stars” champ says he’s hung up his dancing shoes forever, so you can breathe a sigh of relief if you were dreading a special performance in the future.

“I’m never dancing again. I have retired from dancing,” Bones tells People. “The dancing thing was crazy because I went into it not knowing how hard it actually was. Being around the pros and actually seeing them do their thing, they’re professional athletes.”

The radio show host pulled off one of the — if not the — most shocking and controversial wins in “Dancing” history, when he and Sharna Burgess upset three technically superior dancers in the finale for the Mirrorball trophy. They compensated for their lower scores the whole season with votes from Bones’ large fan base, which had many people — including former champ Alfonso Ribeiro — demanding a tweak to the voting system after the season.

To his credit, Bones has never been delusional about his ability or lack thereof. “I was never to the level, even when the show ended,” he admits. His whole narrative during the season was an underdog who couldn’t dance, so he was never surprised by the haters during and after the show. “The people on the internet that loved that show were brutal to me,” he says. “If people love dance, you didn’t love me on that show. If people love people going on and trying something new and putting their heart on their sleeve and being uncomfortable, then I think that’s who I was able to connect with. No one who was a ballroom fan was ever going to like me.”

SEE As expected, ‘Dancing with the Stars’ won’t return in spring 2019, but maybe that’s a good thing

Luckily for him, he found a kindred spirit with two left feet in Joe “Grocery Store Joe” Amabile, who got the bulk of the low scores and was eliminated in the semifinal. “We’re just people trying to figure it out and I was trying to figure out that show every week,” Bones says. “I was not the best dancer. Except for Joe, I was the second worst dancer on the whole show. We bonded in our inability to dance. I take that Mirrorball everywhere.”

Even if Bones wanted to return to the show to guest-judge or sit in the audience or do any non-dancing activity, he won’t be a be able to do it until the fall; the show is sitting out the spring season for the first time since 2007. But if you do need your Bones TV fix in a non-dancing capacity, he’s the in-house mentor on “American Idol” next season.

“For me, to be back in a place where I actually know what I’m talking about — because I just got off a show where I had no idea what I was doing for three months at all — it’s really exciting to come and actually know a little bit,” Bones says.