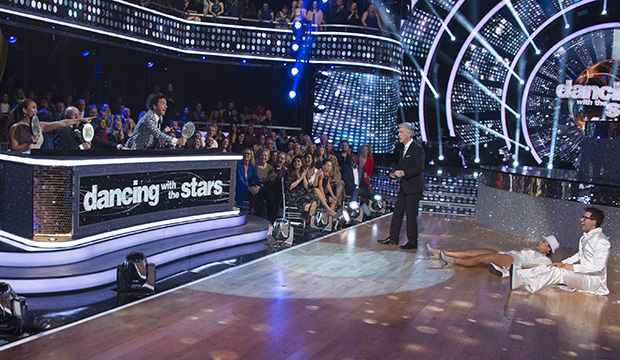 It’s better to give than to receive, and the judges’ very generous donation of a 30 for Bobby Bones‘ freestyle has saved him and “Dancing with the Stars” from further ignominy. Without that 30, he would’ve been the first winner who didn’t receive a perfect score during their run.

A perfect score for Bones and his partner Sharna Burgess was by no means guaranteed. He had never received a higher single score than an 8 and never scored higher than a 24, first achieved in Week 7, and his dancing level, frankly, didn’t really warrant much higher than that. But as the judges are wont to do sometimes, they handed out perfect scores for everyone’s freestyles on Monday’s finale, which is also kind of insulting to Milo Manheim, Evanna Lynch and Alexis Ren; if Bones’ half-soliloquy, half-dance deserved a 30, then their far technically superior routines deserved 40s. Hilariously, this means Bones has gotten three 10s but never received a 9.

The last-minute 30 makes Bones one of three champs, along with Kelly Monaco (Season 1) and Adam Rippon (Season 26), to have gotten one perfect score en route to their victories, and all three got theirs in the finale. There are some asterisks involved though. The inaugural “Dancing” season was only six weeks long and Season 26, aka the “Athletes” outing, was only four weeks long. Bones is the only winner to have gotten one perfect score in a regular-length season.

Season 25 champ Jordan Fisher holds the record with the most perfect scores, at nine, besting Bindi Irwin (Season 21) and Laurie Hernandez (Season 23), who each grabbed eight. Most winners received four perfect scores, and the three-to-five range is the most common. Interestingly, the judges were far stingier with the 30s in the earlier days of the show, but what’s most consistent is that a majority of these people didn’t pick up their first perfect score until deep into the season.

Here are all the “Dancing” winners ranked by their number of perfect scores for individual dances (out of 30 or 40).