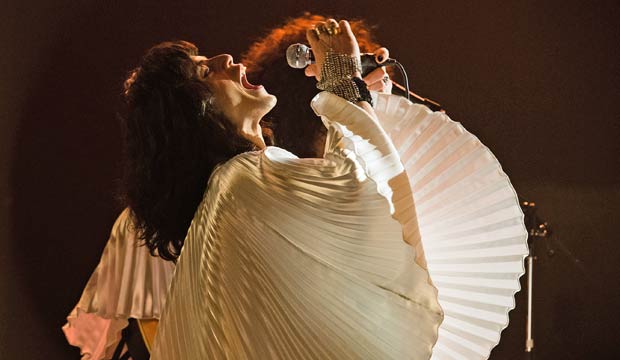 After its blockbuster first two weeks of release it was clear that “Bohemian Rhapsody” would soon make history. The third weekend was the charm for the musical biopic, which is now officially the highest grossing LGBT movie of all time.

The film follows the formation and career of the British rock band Queen, whose lead singer Freddie Mercury (played by Rami Malek) was flamboyantly queer, though cagey about his sexual identity at the time. There was early concern that this film would sidestep or deny Mercury’s sexuality, but the film is ultimately open about his same-sex attraction, including his relationship with Jim Hutton, who would be Mercury’s partner during the last years of his life before the rocker died of AIDS in 1991.

As of Monday, November 19, “Bohemian Rhapsody” made $130 million at the domestic box office. That places it ahead of the 1996 comedy “The Birdcage” ($124 million), the queer subtext of the 1994 thriller “Interview with the Vampire” ($105 million), the 2014 Alan Turing biopic “The Imitation Game” ($91 million) and the groundbreaking 2005 cowboy romance “Brokeback Mountain” ($83 million) rounding out the top five.

Granted, “Bohemian Rhapsody” is still behind “Birdcage” and “Interview” if you adjust for two decades worth of inflation, but the film may have staying power as the fall awards season kicks into high gear. And it has already eclipsed those 1990s hits in worldwide receipts. “Birdcage” made $185 million globally, while “Interview” accumulated $223 million. “Bohemian” is already up to $387 million against a $52 million production budget.

SEELoved by Oscars, not by critics: Can ‘Bohemian Rhapsody’ follow in footsteps of ‘The Reader,’ ‘Iron Lady’ and more?

“Bohemian” is one of many films advancing LGBT representation in 2018, also including “Green Book,” “The Favourite,” “Boy Erased,” “Colette,” “Disobedience,” “The Miseducation of Cameron Post” and “Can You Ever Forgive Me?,” all of which feature prominent queer roles. And this past spring “Love, Simon” became the first gay teen romantic comedy ever released by a major studio. They’re here, they’re queer, and America seems to be getting pretty used to it.