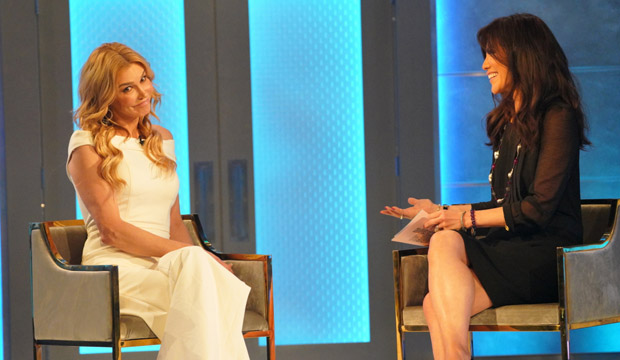 Brandi Glanville was not surprised to be walking out of the “Celebrity Big Brother” house during the live double eviction episode on Friday, February 23. Wearing an elegant white pantsuit, Brandi was the only houseguest who was dressed to impress and was clearly prepared to meet up with host Julie Chen. “It doesn’t surprise me,” she said. “I definitely am sad that Ross [Mathews] chose to betray me and stab me in the back. We had a final two from the second day, so when it was between me and Marissa [Jaret Winokur] I assumed he would choose me. He just likes her a little bit more.”

Brandi’s revelation that she had a final two deal with Ross surprised Chen, who asked, “You wouldn’t have taken Ariadna [Gutierrez] to the end?” Brandi explained, “I don’t know. I want Ari to win, but I can’t win sitting next to Ari.” Despite Ross turning his back on her, Brandi plans to continue their friendship outside the house. “I love Ross. You can’t stay mad at him for long and he bribed me with free alcohol for the rest of our friendship.”

What did Brandi really think about her nemesis, James Maslow? “I don’t know if everyone saw, but I just found him to be a little arrogant and cocky rather than confident. It was just annoying!” But ultimately, it was Brandi’s own mouth that most likely got her evicted. “Yes. I’m 45 and if I could change and think before I speak, I would have done it by now. Trust me, I’ve tried. It just doesn’t happen.”

In terms of drama, how does “Celebrity Big Brother” stack up against “The Real Housewives of Beverly Hills?” Apparently, “Big Brother” is more cutthroat. “You’re living with these people 24/7 and you think that you’re best friends and you’ve become like a modern family. Then you’re a castaway. I didn’t expect to have the love that I have for those people in there.”

Who is Brandi cheering for now? “I hope that Ari can win the next two competitions. Not that it’s the smartest thing to take her because they could all beat Mark [McGrath] in the end. I’m just praying they have fun with it and don’t take it all too seriously.”

'Big Brother' will return for a 22nd season, and yes, so will Julie Chen Moonves

'Big Brother': How to vote for America's Prankster and really mess with Holly Allen's HOH…

'Big Brother' America's Favorite Houseguest: Who do YOU want to win $25,000 prize in Season 21 finale…