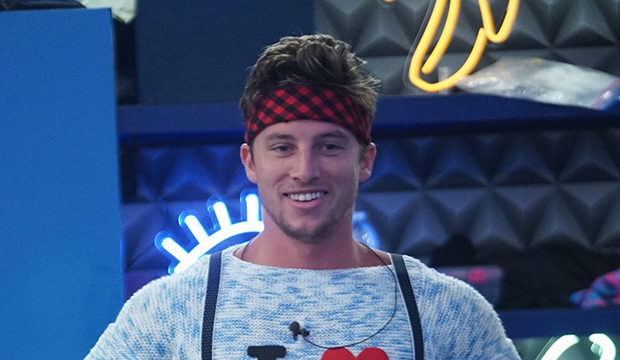 Brett Robinson nearly knocked the door off its hinges as he stormed out of the “Big Brother” house following his unexpected exit on Thursday’s live Double Eviction episode. The buff cybersecurity engineer then stopped to hype up the crowd before making his way over to greet host Julie Chen. Brett was blindsided when the house unanimously voted 3-0 to evict him over Sam Bledsoe. Gold Derby readers did not predict Brett would be sent packing. In fact, they thought both Sam and JC Mounduix were more likely to be headed for the jury.

“You got played son,” was a fitting first comment from Chen to Brett, drawing laughter from the crowd. Brett said he wasn’t sure what happened because he’s been loyal to Level 6 the entire game. But why didn’t he expose them before leaving the house? “I figured in this scenario I could maybe tug on those heartstrings,” he said. “This was their chance to get Sam out. They were playing some other angle and I was hoping if I kept my mouth shut that they would stay loyal.”

Chen then reminded Brett that he wasn’t exactly the most loyal player in the game. He was targeting his alliance members Kaycee Clark and Angela Rummans after all. “They don’t know that though!” he rebutted. “I was hoping they thought Tyler [Crispin] did something or someone else played a move.” Brett’s reason for breaking rank was simple: “I know I can beat JC and Sam. I don’t know if I end up in the final four if I can beat Kaycee and Angela.”

SEESam’s raunchy ‘Big Brother’ speech has us reaching for the soap: ‘I will absolutely rip these b*****s to shreds!’

So who does Brett feel most betrayed by? “Tyler,” he quickly replied. “He was my loyal wing man. I never even thought about betraying him.” Chen noticed the two hadn’t made a deal until recently and weren’t close in the beginning of the game. “We actually slept in the same bed the first night,” Brett reminded her and joked, “I’m old fashioned. I knew when I made that final two I either solidified my bond with Tyler or shot myself in the foot. I’m upset, but I do respect the game.”