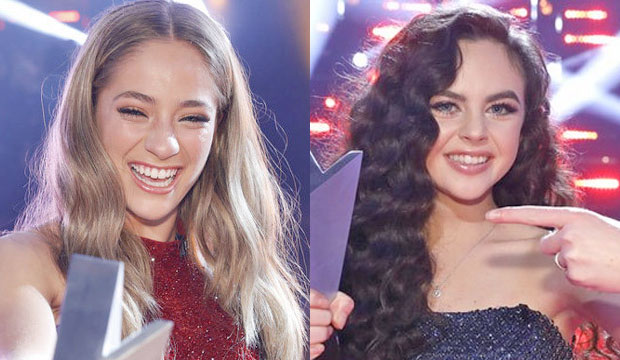 Kelly Clarkson has only been a coach on “The Voice” for two seasons, but she already has two victories under her belt: pop artist Brynn Cartelli in Season 14 and country singer Chevel Shepherd in Season 15. In our recent poll we asked “Voice” fans to name which winner is their favorite and Brynn narrowly beat out Chevel, 49% to 40%. The other 11% of poll respondents voted that they “like them both equally.” Give us YOUR opinion on this hot topic down in the comments section.

From the moment Brynn first stepped out on the “Voice” stage and performed “Beneath Your Beautiful” during her blind audition, fans knew there was something special about the Longmeadow, Massachusetts teenager. Both Kelly and Blake Shelton turned their chairs around for Brynn, but Brynn decided to join Kelly’s team, a move that obviously worked out for the best. “I’ve been a huge fan of you, Kelly, since I was like four years old,” Brynn said at the time.

As a member of Team Kelly, Brynn sang “Ready For It?” in the battles and “Here Comes Goodbye” in the knockouts. The live shows then began, with America voting her through each week thanks to her performances of “Up to the Mountain,” “You and I,” “Fix You” and “What the World Needs Now is Love.” The three songs she performed in the season finale were “Skyfall,” “Don’t Dream It’s Over” and “Walk My Way.”

The final two came down to Brynn of Team Kelly and Britton Buchanan of Team Alicia Keys, with Brynn winding up with the most votes. Since leaving the competition as a winner, Brynn signed with Atlantic Records and released two singles: “Walk My Way” and “Last Night’s Mascara.” She’ll next be seen opening for Clarkson during her 2019 “Meaning of Life Tour.”

When Gold Derby interviewed Brynn after her “Voice” victory last season, she told us, “I’m really excited for what my future holds.” Brynn then reiterated, “I’ve been a crazy fan of Kelly since I was little. My parents were obsessed with her when she was on ‘American Idol’ and they always rooted for her. Now we’re all friends and it’s super cool!”