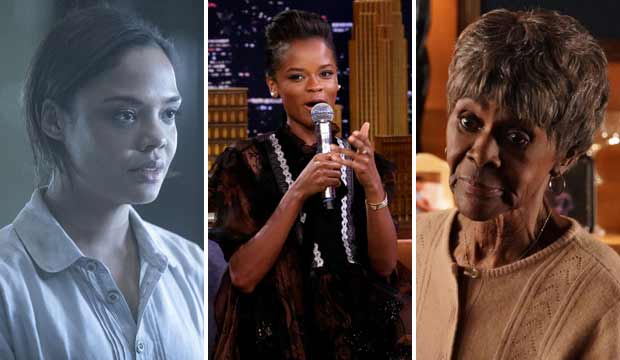 In an age of TV revivals from “Gilmore Girls” to “Will and Grace” to “Twin Peaks” it should have been no surprise when a new “Buffy the Vampire Slayer” series was announced. “Alias,” “Lost” and “Fringe” alum Monica Owusu-Breen is writing, and original series creator Joss Whedon is taking part too. And the new Slayer will reportedly be a black woman. At first it wasn’t clear if the new show would be a reboot or a continuation, but Owusu-Breen recently suggested that it would follow a new character. So what actress should be enlisted to battle the forces of darkness? There’s a lot at stake here — pun very much intended.

We asked our forum posters for their dream casting picks. Some suggest a relative unknown for the part, but some of the more established names bandied about included “Westworld” and “Thor: Ragnarok” star Tessa Thompson, “Black Panther” breakout Letitia Wright, and even — wait for it — Cicely Tyson.

Don’t scoff at that last idea. The “Buffy” series finale magically transformed the rules of Slayer lore so that there isn’t just one Slayer in a generation but dozens, or maybe hundreds — any woman with the potential. So there’s no reason why it couldn’t be Cicely Tyson. And admit it, you would watch the hell out of that show. I know I would. Read more of our posters comments below, and join the discussion here in our forums or below in the comments.

chanelmoviestar: “I hope they look at unknowns for the part. But I think Zazie Beetz, Tessa Thompson, Sasha Lane, Letitia Wright, or Kiersey Clemons have the chops. Just not Zendaya.”

ignite: “I feel strongly it should feature a newer, up-and-coming actress, but if they want to go with a more known name, I would not mind Tessa Thompson or Letitia Wright. Whoever they cast, though, a spin-off would be infinitely better than a reboot. [Sarah Michelle Gellar] is far too iconic as Buffy for the character to just be recast. They should really just follow the life of one of the past Slayers, or one of the new Slayers that was called after the series finale.”

Hunter-ish: “Cicely Tyson is the only option, people … I would undeniably watch it if it happened, which it would never.”

Sam H: “Technically there is no reason for Cicely Tyson not to be a slayer. It’s every girl who might be a slayer will be a slayer, so you will have those who aged out of their slaying years still with that potential in them and thus Willow’s spell should affect them too.”