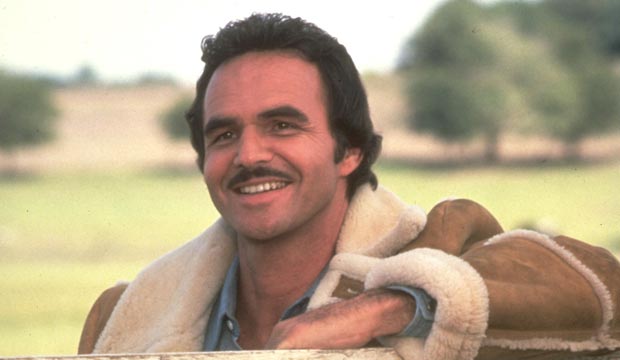 Burt Reynolds was a guy’s guy, a ladies’ man, the ruggedly handsome alpha male of the entertainment world, who always seemed to be having a good time – whether cracking jokes on TV talk shows with pals like Dom DeLuise or saucily posing nude as a centerfold in “Cosmopolitan” magazine — except maybe when he broke his leg during that ill-fated canoe outing in 1972’s “Deliverance,” his breakout film role. According to his reps on Thursday, the actor is dead at age 82 in his adopted home of Jupiter, Florida.

With a thicket of hair, a dapper mustache and a twinkle in his eye, he often came across as a good ol’ Southern boy in such films as “Smokey and the Bandit,” “W,W. and the Dixie Dancekings” and “The Best Little Whorehouse in Texas,” while claiming to be from Georgia. But he was born in Lansing, Michigan, although he would eventually end up in Riviera Beach, Florida, as a child.

He wanted to be a pro football player, but injuries in college ended his hopes for a gridiron career. Reynolds opted to go to Palm Beach Junior where he ended being a lead in a play and winning the 1956 Florida State Drama Award for his efforts. From there, he did summer stock theater with Joanne Woodward, who helped him get an agent, appeared on Broadway and took acting classes. Eventually, he found the nerve to go to Hollywood, appearing on such TV series as “Riverboat” and as the title character in the police drama “Dan August.”

After “Deliverance,” which was nominated for Best Picture and two other Oscars, his stock went up as a movie star, mainly in comedies and action films. In the ‘70s, he appeared in “The Longest Yard”(remade by Adam Sandler), “Semi-Tough” and “Hooper.” Sometimes, Reynolds tried to break the mold, such as appearing in 1974’s “At Long Last Love,” Peter Bogdanovich’s tribute to the Golden Age of Hollywood musicals. Unfortunately, the cast including Cybill Shepherd, Eileen Brennan, Madeline Kahn and John Hillerman weren’t exactly in Fred and Ginger’s league. “Time” magazine’s review declared “When dancing, the stars look as if they’re extinguishing a camp fire.”

One gem that brought his outsized macho persona down to human level was 1979’s “Starting Over,” a romantic comedy about a man whose wife (Candice Bergen) tells him she has been having an affair and wants a divorce so she can pursue a career as a singer and songwriter. He meets a sweet, down-to-earth woman (Jill Clayburgh) and they start a life together – until his ex decides she wants him back. Alas, both his co-stars were Oscar-nominated but he was snubbed, and had to make do with a Golden Globe nomination for Best Actor in a Comedy or Musical.

That led him back to his manly men roles, including “Rough Cut,” Sharkey’s Machine “and “Stroker Ace,” and comedic novelties such as “The Cannonball Run,” “Best Friends” and “Rent-a-Cop” in the ‘80s. But in 1997, the year after he filed for bankruptcy when his overspending, divorce from actress Loni Anderson and failed investments put him in financial difficulty, Reynolds was offered a plum part by a young filmmaker, Paul Thomas Anderson: Jack Homer, a porn filmmaker and patriarchal figure to a crew of actors in “Boogie Nights.” However, Reynolds hated the film so much when he saw an early screening, he fired his agent immediately after the viewing. Turns out, it would be the source of his lone Oscar nomination, as a supporting actor. At least he ended up with a Golden Globe win. Even that couldn’t convince him to do Anderson’s next film, “Magnolia.” However, the attention did lead to other opportunities, even if they weren’t in the same league.

He did win a 1990 Emmy for his work on the TV show “Evening Shade” and he was nominated for a Daytime Emmy three times for producing the game show “Win, Lose or Draw.”

Reynolds had more than his share of Razzies nominations and wins. But if his affable, down-to-earth actor truly won anything, it was the hearts and appreciation of his fans. He was named Favorite All-Around Entertainer or Favorite Motion Picture Actor in 1979, 1980, 1982, 1983, 1984 and 1991 at the People’s Choice Awards. And he was the No. 1 box office attraction for five years in a row in the late ‘70s. No less than Arnold Schwarzenegger gave him a special citation for his achievements when he was governor of California.

“Burt Reynolds was one of my heroes,” the “Terminator” actor tweeted. “He was a trailblazer. He showed the way to transition from being an athlete to being the highest paid actor, and he always inspired me. He also had a great sense of humor – check out his Tonight Show clips. My thoughts are with his family.”

Sadly, the actor didn’t get a chance to shoot his role in Quentin Tarantino’s upcoming film “Once Upon a Time in Hollywood, “ with a dream cast including Leonardo DiCaprio, Brad Pitt and Margot Robbie. The story set in L.A. in 1969 takes place when the Manson family killed actress Sharon Tate and committed a series of other movies. Reynolds was to play the owner of the ranch where the cult members lived.