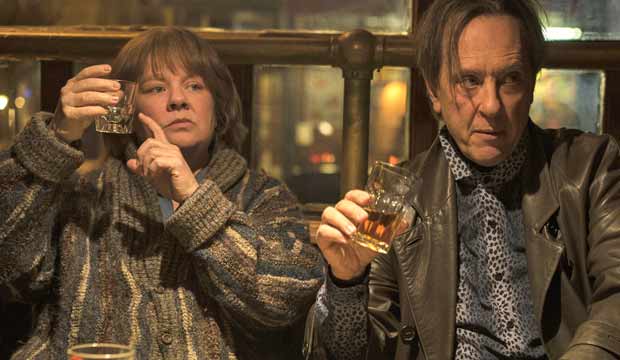 “Can You Ever Forgive Me?” opened on October 19 with its central character, real-life biographer Lee Israel, showing little interest in forgiveness. When she fell on hard times she turned to forgery; she impersonated famous literary figures like Noel Coward and Edna Ferber in a series of phony letters that she sold to collectors. She wasn’t especially repentant and she didn’t suffer fools, which she considered almost everyone to be. But this acidic role is now played by the usually likable Melissa McCarthy. How does she do?

As of this writing the film has a MetaCritic score of 85 based on 20 reviews, and on Rotten Tomatoes it’s still 100% fresh with 52 reviews counted so far. The Rotten Tomatoes critics’ consensus says the film is “deftly directed” by Marielle Heller and it “proves a compelling showcase for deeply affecting work” from McCarthy as well as her co-star Richard E. Grant, who plays Lee’s dysfunctional friend and partner in crime, Jack Hock.

The notices for both actors and for the filmmaker who guides them have been almost uniformly positive, with McCarthy’s performance being described as a “career best,” “nuanced” and full of “range.” Grant gives an “Oscar-worthy turn” (despite his extensive list of film credits, he’s never even been nominated). And Heller “flawlessly recreates” the New York City of the early 1990s, and she “never judges” her characters.

So does this sound like an awards contender to you? McCarthy was previously nominated for her breakout supporting role in “Bridesmaids” (2011), and she could especially impress voters for going so far against type like other comedians-turned-dramatic-actors including Will Smith (“Ali” and “The Pursuit of Happyness”), Mo’Nique (“Precious”) and Steve Carell (“Foxcatcher”), among others. Check out some of the reviews below, and discuss this film and more with your fellow movie fans in our forums.

Katie Rife (The A.V. Club): “Maintaining an audience’s sympathy for a character through their most fumbling, frustrating lows requires compassion and clarity of purpose, both of which McCarthy amply demonstrates here. It’s a career-best performance, the kind of nuanced turn we all suspected she could deliver, if only someone would give her a chance to do it.”

Monica Castillo (RogerEbert.com): “The range in McCarthy’s performance cannot be overstated. At almost every turn, her character gives the audience plenty of reason not to like her. Yet, with Heller’s sympathetic approach and McCarthy’s acting, the movie humanizes her beyond caricature.”

Leah Greenblatt (Entertainment Weekly): “Director Marielle Heller (‘The Diary of a Teenage Girl’) flawlessly recreates the early-’90s Manhattan of Woody Allen and ‘Seinfeld’ reruns, a leached-brown city of windy park benches, linoleum-countered diners, and cluttered apartments … The movie, like the real story, eventually doles out its consequences, but Heller never really judges; it’s always better to ask for forgiveness, after all, than permission.”

Witney Seibold (IGN): “The great achievement of ‘Can You Ever Forgive Me?’ is that Israel is wholly recognizable and sympathetic. She’s mean-spirited and private and operated behind a wall, refusing to let people in, save for the flamboyant shoplifter Jack Hock (Richard E. Grant in an Oscar-worthy turn), who knows nothing about literature, but whose ramshackle, dandyish confidence she could not resist.”