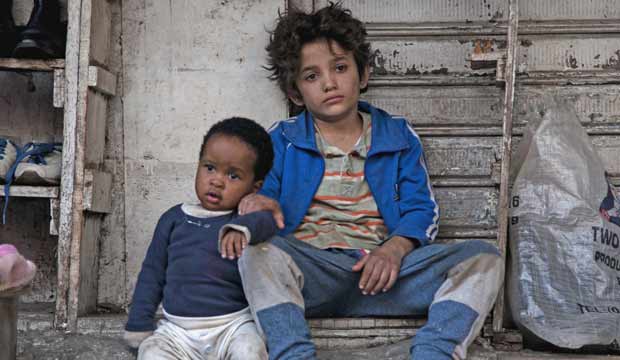 From the gritty streets of Lebanon to a fairly ordinary 56th Street in midtown Manhattan, Zain Al Raheeda was sitting patiently. He is the 12-year-old wunderkind star of “Capernaum.” Hard to pronounce (“Cah-PER-neeum” is what Sony Pictures Classics likes) and even harder to watch in some places, but easily a candidate for award consideration.

On this day a light buffet and questions for the star, his director and the film’s composer (being married to the director makes it easier) were in the posh Whitby Hotel following a screening. The film — about a jailed boy suing his parents for giving birth to him — clearly had many fans in the room. Moderating this panel, I have to admit I am one of them.

“Zain was a Syrian refugee living in Lebanon. One of the poorest neighborhoods,” explained director Nadine Labaki. Someone suggested that like Danny Boyle after “Slumdog Millionaire,” Labaki has a responsibility to her cast. She agrees. “I’m very moved and touched by the problem of refugees, especially in Lebanon. Kids are on the street, either begging or working but not going to school. I felt a responsibility to humanize it, put a face on the problem, and the face of this little boy.”

Labaki did a lot of research, and even more filming. Ninety-four shooting days over six months gave her over 500 hours of footage. “It was a very organic process,” she said. To get to the point where we blend in and people don’t see us anymore. Capturing their reality and being almost invisible.” Her composer and husband Khaled Mouzanar is just surprised he and his wife didn’t divorce after the shoot. “We mortgaged our home to make this film. [Nadine] was obsessed with the reality and the documentary style.”

With his director interpreting, the young Al Raheeda told the room of academy members and journalists that he found the filmmaking process “normal.” He was, after all, largely playing himself. “But when I saw the film in Cannes it was overwhelming. Now I want to either become an actor or a chef.” The Cannes Jury Prize the film won this year came with something else that must have impressed the new young star — a 15-minute standing ovation.

One other nice end note: he’s not in Lebanon anymore. “He didn’t know how to read or write when we started the film,” revealed Labaki, “but now he’s going to school in Norway.” Of her new crusade, helping those who were in the film, Labaki is proud. “We believe in it. It changed our lives. The reality we were living every day. The actual sound in the background is kids crying. It’s real. It’s difficult.”