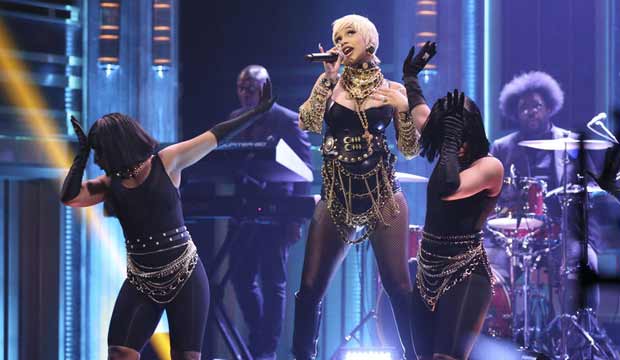 Rapper Cardi B broke through in 2017 with her single “Bodak Yellow,” which topped the Billboard Hot 100 singles chart and earned her Grammy nominations for Best Rap Performance and Best Rap Song. She has also had three other top-10 singles: “MotorSport” with Migos and Nicki Minaj, “Finesse” with Bruno Mars, and “No Limit” with G-Eazy and A$AP Rocky. But it’s only just now that she has released her debut studio album, “Invasion of Privacy,” which dropped on April 6. Will she score more Grammy nominations in 2019? She could make history as the first solo woman ever to win Best Rap Album.

To date the only female artist who has won Best Rap Album was Lauryn Hill as a member of the hip-hop trio The Fugees. They won in 1997 for “The Score.” No woman has won since, not even Missy Elliott, who became the first and only female rap artist nominated for Album of the Year in 2004 with “Under Construction.” Elliott lost both Album of the Year and Best Rap Album to OutKast for “Speakerboxxx/The Love Below.” To date Missy Elliott is the most nominated woman in the category with four bids, followed my Nicki Minaj with two. They’re the only two women with multiple Rap Album nominations, compared to 20 men who have received multiple bids over the years.

Things could change if the reviews for “Invasion for Privacy” are any indication. As of this writing it has a MetaCritic score of 84 based on 18 reviews. It’s being praised as “one of the most powerful debuts of this millennium,” featuring “aggressive club bangers” but “deepened by moments of introspection.” Cardi B herself is a “powerful rapper with a forceful and distinctive flow,” and she’s “more versatile” than most pop stars. Could she even be a contender for Album of the Year? It may be a perfect storm for her as the recording academy has come under fire for its treatment of both women and hip-hop artists.

Check out some of the reviews for “Invasion of Privacy” below. And join the discussion on this and more with your fellow music fans in our forums.

Jem Aswad (Variety): “She’s a powerful rapper with a forceful and distinctive flow and clever, piercingly funny lyrics … Funny, fierce, foul-mouthed and in-your-face, ‘Invasion of Privacy’ is one of the most powerful debuts of this millennium.”

Jon Caramanica (New York Times): “Cardi B … is more versatile than most rappers or pop stars of any stripe. And what’s most promising about the exuberant and impressive ‘Invasion of Privacy’ — an album full of thoughtful gestures, few of them wasteful — is that it’s a catalog of directions Cardi, 25, might go in, slots she might fill, or even invent.”

Josh Hurst (Slant): “The album lays out Cardi’s personal narrative while also proving her to be a deeper, more diverse talent than she’s previously let on. Alongside aggressive club bangers like ‘Bodak Yellow’ and ‘Bartier Cardi,’ ‘Invasion of Privacy’ leaves space for scene-setting epics (‘Get Up 10’) and R&B jams (‘Ring’). Lyrically, Cardi’s tough swagger is deepened by moments of introspection.”

Ben Beaumont-Thomas (Rolling Stone): “A magnificent debut that fuses vulnerability, sexual voraciousness, paranoia and party music shows the rapper is capable of far more than punchy put-downs … Like Lil Kim, Foxy Brown and Nicki Minaj before her, Cardi’s genius is to take the sexually available ‘thot’ image and rehumanise it, reminding boorish men of women’s agency, wit and emotional reality.”