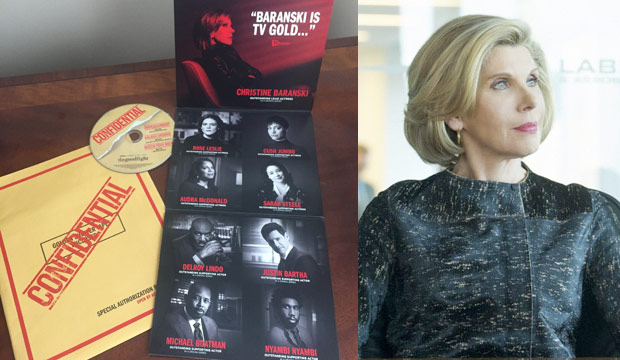 CBS All Access and CBS Television Studios recently sent TV academy members an Emmy FYC mailer highlighting the best episodes of the second season of “The Good Fight.” The shrewdly themed package arrived to voters in a “confidential” manila envelop that teased, “golden shower tapes enclosed,” a tongue-in-cheek reference to the highly political tone of Season 2. Inside the envelope the sleek red, white and black tri-fold booklet highlights the nine series regular cast members with striking black-and-white photos, and gives the largest spotlight to series star Christine Baranski, who contends for a nomination for Best Drama Actress.

SEE ‘The Good Fight’ Emmy FYC video shines a light on Christine Baranski, who ‘knows how to nail a closeup’ [WATCH]

The DVD sent to voters contains three standout episodes from this spinoff of “The Good Wife”: “Day 450,” alternatively titled “Impeachment,” which centers on a legal brainstorming session between the series’ central law firm and the Democratic National Committee on how to best approach the potential impeachment of President Donald J. Trump; “Day 464,” also known as “Golden Shower,” which finds the firm defending an immigrant who suspects her deportation comes as a repercussion for starring in the infamous golden shower tape with the President; and “Day 471,” or “Watch Your Back,” which centers on the fallout at the firm when one of its attorney’s gets shot in the chest by an unknown assailant.

While the disc contains three of the best episodes of the season, the mailer also includes a personalized access code where voters can stream the entire 13-episode season online. This approach marks a shift in strategy for the series from last year, when the studio sent the entire 10-episode season in a two-disc package. In addition to this year’s mailer, CBS Television Studios sent the first three episodes of the season — “Day 408,” “Day 415,” and “Day 422” — to voters as a part of their overall Emmy FYC package.