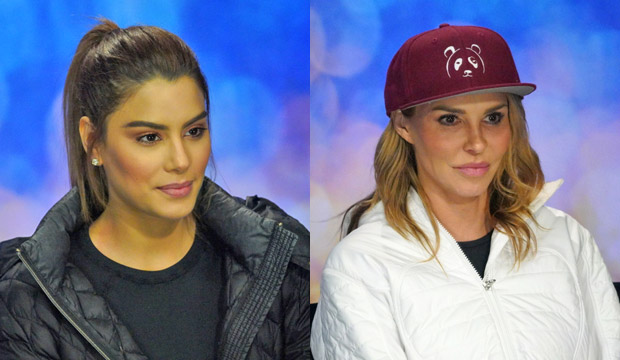 Friday night on “Celebrity Big Brother,” fans were finally treated with the first double eviction episode of the season. The two-hour event began with Miss Colombia Ariadna Gutierrez and “Real Housewife” Brandi Glanville nominated for eviction by Head of Household champ Mark McGrath. His true target was Brandi, and he only nominated Ariadna “by association.” Who went home between this duo? And then who won the live HOH comp and who did they send packing?

Below, check out our minute-by-minute “Celebrity Big Brother” recap of Season 1, Episode 11 to find out what happened Friday, February 23. Then be sure to sound off in the comments section about your favorite houseguest, who annoys you the most and who you think can go the distance to join the “Big Brother” winners list. Keep refreshing/reloading this page as we’ll be updating live.

7:59 p.m. – “Previously, on ‘Big Brother’!” In Wednesday’s 10th episode the house reacted to Metta World Peace quitting the game. Mark was then named the winner of the HOH challenge, but only because James Maslow threw it to him. While Ross Mathews and Marissa Jaret Winokur tried to get Mark to nominate Omarosa for eviction, he instead chose Ariadna and Brandi. Which two houseguests will go home in tonight’s double eviction? Let’s find out!

8:10 p.m. – Despite Mark making the nominations, Brandi is convinced James is pulling the strings. Mark apologizes profusely and is concerned Ariadna thinks she’s the target. Both Brandi and Ariadna are on to the fact that Ross is playing both sides. Ross approaches them to give his condolences but they brush him off. Meanwhile, himself and Marissa now feel like they can trust Mark and James.

8:15 p.m. – James tells Ariadna that Brandi is the target. He thinks Brandi is the stronger competitor and super annoying. He definitely wants her to go home. He tells Ariadna if Brandi is saved by the veto, Omarosa will go home. Ariadna doesn’t fully trust his word and is determined to win the Veto. Omarosa is telling the house that the press downplays her qualifications to work in the White House, even though she has a doctorate in Communications. Brandi asks, “Isn’t that, like, the easiest degree to get?”

8:20 p.m. – Time to draw names for the Veto competition! Joining Mark, Ariadna and Brandi are Omarosa, James and Marissa. Ross will sit this one out. Back in the pantry, Marissa confirms to Ariadna that she’s not the target. Ross won’t promise Ariadna what his decision is just yet. He hopes someone uses the Veto and Omarosa goes home. Meanwhile, Brandi is dressed in a fancy white pantsuit at the live eviction show so I think it’s pretty clear what’s about to go down tonight.

8:25 p.m. – The entire cast is in the backyard drinking. Nobody is tipping back the wine glass quite like Brandi. To James’ face, Brandi says she wishes he and Omarosa were on the block. They proceed to argue. James says she’s been poking at him since day one and is incredibly rude. She responds that he is super cocky. James said he’s excited to send her home and leaves. Back inside the house, Mark said the constant “roasting” is exhausting. Unphased, Brandi checks her makeup in the mirror and lashes out at Marissa for talking about her with Mark and James. Marissa defended herself, but Brandi reminded her how many times she has called James cocky as well. Brandi believes she is being blamed for everything.

8:30 p.m. – Marissa immediately runs to tell everyone Brandi yelled at her. That is completely untrue, there was no yelling. Marissa is being oversensitive and sealing Brandi’s fate.

8:40 p.m. – Time to play the Veto competition! One at a time, each competitor must reveal action figures and label the box with the three houseguests that make up the eyes, nose and mouth of that action figure. The person to correctly identify four action figures in the shortest amount of time wins. Omarosa takes her time because she’s not interested in winning. She doesn’t want to be in anyone’s cross-hairs. Too late for that! She takes advantage of her time alone with Ross and says, “Don’t you want to sit in the final two with me? Don’t you think you will beat me?” Ross does not feel comfortable putting his game in her hands, but she makes a great point.

8:50 p.m. – Ariadna soared through the competition in just over nine minutes, about a quarter of the time it took Omarosa. James got tripped up on the third action figure and ran out of time. Next, Marissa only advanced to the second action figure before she was bounced. Mark failed to get even one correct. Last, Brandi’s game was on the line. With all the pressure on her, she hit the ground like a safe and failed to get even one answer correct. Ariadna won the Power of Veto! Brandi’s only hope now is that the house decides Omarosa should go home instead of her.

8:55 p.m. – Mark tells James he is planning to nominate for Marissa, he won’t give the house the chance to vote out Omarosa over Brandi. James agrees with his decision. James doesn’t think Ross and Marissa will ever turn on him, but Mark isn’t convinced. This is “Big Brother,” not “Big Homie.” At the Veto meeting, Ariadna pulls herself off the block. Like he said, Mark put Marissa on the block as her replacement. This is her first time on the block and she plans to just stay out of Brandi’s line of fire.

9:05 p.m. – Time for the first eviction of the night! James, Omarosa and Ross voted to evict Brandi. Ariadna voted to evict Marissa. By a vote of 3-1, Brandi has been evicted from the “Celebrity Big Brother” house!

9:25 p.m. – It is now time to crown a new HOH! Mark is not eligible to compete. The others are sequestered in separate rooms for the game. Julie will ask them a series of questions based on art they studied earlier in the day. For every correct answer, they will receive one point. The houseguest with the most points at the end of seven questions will be the next HOH. After seven questions, James and Omarosa were tied for first place. In a tie-breaker, the new HOH winner is….Omarosa! Bring on the drama! Who will she nominate? Marissa looks like she should have worn a diaper tonight, that could be a hint.

9:30 p.m. – At the live nomination ceremony, Omarosa decided to put Ross and Marissa on the block. One of them may be the next houseguest to be evicted. Will one of them save themselves with the Power of Veto? We will find out next!

9:40 p.m. – With just six players remaining, everyone will play in the Power of Veto competition. In “Art-Rageous,” competitors are looking at six paintings. Each painting is a replica of something in one of the “Big Brother” rooms. When they figure out which painting is not an exact replica, they must race back and submit their answer. The first houseguest to correctly answer will win the Power of Veto. Ross is the first to answer and he has won the Power of Veto! Ross escapes Omarosa once again. Marissa is begging for someone to save her.

9:45 p.m. – With Ross winning a clutch Veto, who will go up on the block in his place? The decision is up to Omarosa. She replaced Ross with James, who looked angry (and nervous). Determined to break up a duo, Omarosa will be successful one way or another. The duo of Ross and Marissa or James and Mark is about to reach it’s end.

9:55 p.m. – It’s time for the second live vote of the night! James said it’s impossible to beat Marissa in the end, so they should keep him. Marissa said they’re not going to get to the final two with James because he will beat them in every competition and she can’t hold onto anything for very long. Who was more convincing? By a vote of 2-1, James was evicted from the house. Ross seemed torn about his choice, but had he voted out Marissa, he would have lost the game. Turning on his biggest ally of the season would have never sat well with the jury.

9:59 p.m. – The final five are headed to finale night! Everyone except Omarosa will compete in the next HOH competition. Then, on Sunday, one of the nominees for eviction will be sent packing. Then, the final four will compete live in one competition to become the last and most powerful HOH in this history of Big Brother. That HOH will immediately evict two houseguests, choosing who he or she will be sitting next to when the jury votes. Tune in Sunday to find out who is the first winner of “Celebrity Big Brother!”