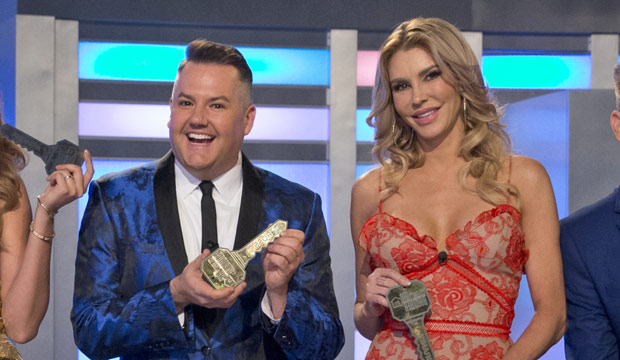 Monday night on “Celebrity Big Brother” the fourth houseguest was sent packing, following in the footsteps of Shannon Elizabeth, Keshia Knight Pulliam and Chuck Liddell. After reality TV villain Omarosa won the Head of Household competition, she nominated television personality Ross Mathews and “Real Housewife” Brandi Glanville for eviction, with Ross being her true target. Which player won the live Power of Veto challenge and who ended up being evicted in eighth place?

SEE ‘Celebrity Big Brother’ spoiler: Round 5 Head of Household is …

Below, check out our minute-by-minute “Celebrity Big Brother” recap of Season 1, Episode 9 to find out what happened Monday, February 19. Then be sure to sound off in the comments section about your favorite houseguest, who annoys you the most and who you think can go the distance to join the “Big Brother” winners list. Keep refreshing/reloading this page as we’ll be updating live.

SEE ‘Celebrity Big Brother’ spoiler: Round five nominees for eviction on February 23 are …

7:59 p.m. – “Previously, on ‘Big Brother’!” In Sunday’s eighth episode Omarosa shocked her fellow houseguests by winning the basketball-themed endurance comp. She set her sights on Ross and tried to rally the votes to get him out, swaying Mark McGrath, Metta World Peace and James Maslow over to her side. Will Omarosa’s plan work or will Ross have the last giggle?

8:10 p.m. – Omarosa’s goal this week is to break up the power pairs. Ross sees the bright side, happy he will have a story to tell at dinner parties about the day Omarosa nominated him for eviction on a reality TV show. Omarosa planted seeds of doubt and Brandi foolishly admitted their Final Four deal in front of the house. Omarosa’s snide wink to Melissa at the nomination ceremony worked brilliantly! Never underestimate a reality TV pro! Now Brandi and Melissa have a conflict.

8:15 p.m. – Ariadna is better at this game than anyone gave her credit! She is sly enough to realize that Omarosa has a deal with James, Mark and Metta. She tells Melissa, who is blown away. Miss Colombia is here to play, y’all! Melissa takes the information to Brandi and Ross. On a side note, Melissa is now convinced Ariadna is the smartest person in the house, which could be troubling for her game. Ross’ goal is now to convince James and Mark to vote for him to stay.

8:17 p.m. – Brandi asks James in front of the rest of the house if he made a deal with Mark and Omarosa. He plays it off, makes Brandi look like the bad guy and denies it all in one sitting. Well played.

8:25 p.m. – Ross doesn’t waste an opportunity to get in the ears of James and Mark. He tells them not to trust Omarosa. James doesn’t like Brandi and would prefer to vote her out, but he wants more from Ross. He wants a final four deal between himself, Ross, Mark and Marissa. In private “bro talk” with Mark, James says they should vote out Brandi. Finally James brings his proposition to Marissa. She wants to save Ross, but she doesn’t want to leave Ariadna in the dust. James insists nobody can beat Ariadna in the end and Marissa is hesitant. James expected her to immediately accept his plea. He basically tells her if she doesn’t accept his deal, he will have to evict Ross.

8:30 p.m. – Julie informs the houseguests that they will be playing for the “VIP Veto,” giving the winner the power to use it twice, if they choose, at tonight’s meeting. The live veto competition is up next!

8:35 p.m. – In the POV competition, “Invitation Only,” competitors will race down the red carpet and bring their puzzle pieces back to the puzzle board. The first to complete their puzzle and hit the buzzer will win the VIP Veto. Metta, Ross, Marissa, Brandi, Mark and Omarosa are playing. Ross barely inched out a win over Omarosa to save himself! But will he use the veto to its full potential?

8:45 p.m. – At the veto meeting, Ross first saved himself. Next, Omarosa replaced Ross with Metta, who wants to leave. Ross chose not to use his veto the second time. Will Metta or Brandi be sent packing? Metta was such a waste this season! How disappointing. There’s not even a week left! Quitters should lose part of their payout.

8:50 p.m. – It is time for the live vote and eviction. Metta thanked everyone on the show, stating Shannon was his favorite player this season. Brandi then thanked Metta for wanting to go home. Once again, Metta is lame! Nothing exciting about watching players quit week to week. Regardless, he was unanimously voted out. Omarosa’s attempt to make something interesting happen this week failed.

8:59 p.m. – The next HOH will air on Wednesday, February 21. Then, on Friday, February 23 we will be treated to a live double eviction, leaving five celebrities remaining. Who will make it to the finale? Metta is hoping Ross takes the crown. Who do you want to win?

Here are the answers to Gold Derby’s contest questions for the fourth LIVE episode of “Celebrity Big Brother”:

Who will be evicted live on air? Metta World Peace