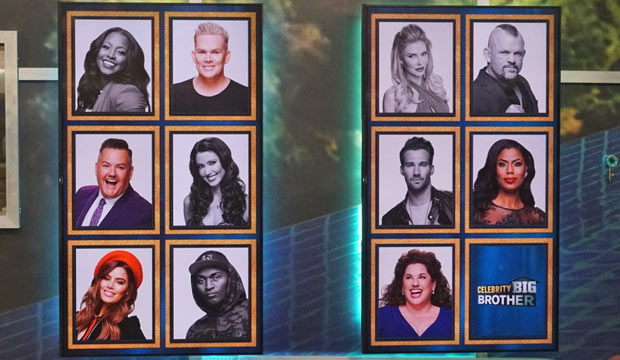 After a month of bickering, backstabbing and Brandi-bashing, the winner of “Celebrity Big Brother” was finally named on Sunday night. Heading into the live two-hour season finale, the Final 5 houseguests were: television personality Ross Mathews, reality TV villain Omarosa, Broadway actress Marissa Jaret Winokur, Miss Colombia Ariadna Gutierrez and rock star Mark McGrath. Sunday’s finale included a whopping three eliminations, and then the jury of nine voted on who they wanted to win the $250,000 grand prize. How did it all play out?

Below, check out our minute-by-minute “Celebrity Big Brother” recap of the Season 1 finale to find out what happened Sunday, February 25. Then be sure to sound off in the comments section about your favorite houseguest, who annoyed you the most and what you think of this latest addition to the “Big Brother” winners list. Keep refreshing/reloading this page as we’ll be updating live.

7:59 p.m. – “Previously, on ‘Big Brother’!” In Friday’s 11th episode the house experienced its first double eviction of the season. During the live two-hour event, Brandi Glanville and James Maslow were both sent packing. Now with only five houseguests remaining, and three eliminations set to take place, it’s still anyone’s game. So let’s get this thing started!

8:15 p.m. – Ariadna, Marissa, Mark and Ross are competing in the HOH competition and Ross is determined to win. Omarosa has been spreading lies about him and he’s terrified he will go home if he doesn’t. The former star of “The Apprentice” is not able to compete because she is the outgoing HOH. Hovering above the ground on over-sized, unstable skis, the competitors have to show balance and athletic ability to win. Marissa was the first to fall, followed by Ariadna. With only the men remaining, Ross tries to convince Mark to drop. Ross has no intention of targeting the rock star. Omarosa tries to break up the deal by telling Mark he looks more stable, but he eventually drops and gives Ross the HOH! Omarosa fully expects to go up on the block, but she refuses to panic.

8:20 p.m. – This HOH win is huge for Ross. It guarantees his place in the final four and gives him one more opportunity to get Omarosa out. Ross cuts a deal with Mark, telling him if Omarosa wins the Veto, he will put up Marissa if Mark promises to vote out Ariadna. He also confirmed he wants to go to the final two with Mark because he is afraid the majority-female jury would vote for a woman to win. Ross tells Ariadna she has to go on the block with Omarosa, but she does not feel safe.

8:25 p.m. – Ross has manipulated the house so beautifully that he has convinced Ariadna to take him to the final two if she wins the final HOH. Omarosa is the only houseguest who doesn’t plan to take Ross to the end, and she’s wise for it! But it is also why she is probably going to be the next person to walk out the door. At the nomination ceremony Ross does, indeed, nominate Omarosa and Ariadna. Who will win the veto?

8:35 p.m. – It’s time for the final veto competition of the season! One at a time, each player will have to match stories to the correct day they occurred in the “Big Brother” house. The player who places the most correct days in the shortest amount of time will win the Power of Veto. Marissa remembers everything perfectly, but she is struggling with the physical aspect of the competition which includes hanging in a harness.. Mark was hit or miss with the correct dates. Ross and Ariadna both looked solid. Omarosa’s lungs tighten up during physical competition so she just rushed through it as fast as she could. Ross and Marissa tied with perfect scores, but Ross had the faster time and won the Power of Veto!

8:40 p.m. – At the Veto Meeting, Ross decides not to use the Power of Veto. Either Ariadna or Omarosa will be walking out the door shortly. During her speech, Omarosa played mind games by telling Ariadna that she believes she is destined to make the final four and finally win her crown. Can Ross finally shove Omarosa out the door? Or will she convince the others that she is their best option to take to the final two.

8:50 p.m. – Time for the first live vote and eviction of the night! By a vote of 2-0, Omarosa has been evicted from “Celebrity Big Brother!” It was all hugs as she walked out to meet Julie (she left by her own free will, she was not dragged out the door). She couldn’t believe she lasted so long and admits she should have been evicted five evictions ago. Her response to walking into the house with a target on her back? “I never had a chance to let my hair down and really be authentic with people and tell my story. This was the first time I was able to show people my true self.” Does she really believe America will not be okay? “We can if we make a pivot as a nation. We’re bigger and better than just two parties.” That’s our girl Omarosa, always bringing people together.

8:55 p.m. – With everyone committing to take Ross to the end, it appears as though he will win this game easily. I can only see one person tripping him up: Ariadna. If she wins the final HOH, I do think she could potentially defeat Ross in the final vote. Ross has betrayed many people on the jury. We have heard both Shannon Elizabeth and Brandi state they would not vote for him. Ariadna is beloved by almost everyone. It’s not a sure thing, but I think Ariadna is the only person who even has a chance to win this game next to Ross.

9:10 p.m. – It is time to crown the final HOH! The first six evicted houseguests have been very busy on their phones and a social media battle has broken out between them. After viewing each battle, the players must correctly choose which #Statement is incorrect. These aren’t actual social media battles, but scripted details about the game the players should remember if they want to win. Ross, Mark and Marissa tied and were forced into a tie-breaker. Marissa was leading until the final question and blew it! After the tie-breaker, Marissa won anyways! Will she make a potential $250,000 mistake and bring Ross to the end with her? The wise choice would be Mark.

9:20 p.m. – Ariadna said Marissa did not make a mistake by choosing Ross. Mark isn’t sure she can beat him, but understands that the duo was connected at the hip from day one. Ariadna said “Celebrity Big Brother” was the best experience of her life. In just moments, the jury cast their vote for the winner.

9:25 p.m. – Chuck Liddell, Keshia Knight Pulliam, Shannon Elizabeth, Metta World Peace, Brandi Glanville, James Maslow, Omarosa, Ariana Gutierrez and Mark McGrath returned to vote for the winner. Shannon was hoping Ross and Marissa would be joining the jury. James was hoping Mark made it to the end. Time for questions!

9:35 p.m. – Throughout the questions, Ross continued to express his constant need to pivot and sometimes he had to make tough choices. Marissa said she was genuine in everything she expressed throughout the game. I’m distracted by Shannon because they camera keeps cutting to her. She has a big smile on her face as if to say these two are full of B-S. Marissa basically then gave Ross credit for all the ideas between the duo. It was a terrible plea to win. Ross brilliantly articulated why he deserves to win. He played hard and he played with compassion. You can kind of see in Marissa’s eyes that she just lost. But jury’s have done crazier things in the past! Who will win?

9:40 p.m. – Many jurors commented that they were voting for the player that was “more honest” with them. Potentially bitter jury? Metta proved why he is the worst to player in the game by closing his eyes and just picking a random key from his bag. That could decide this game if it’s close! Wow! This may actually be a closer vote than I initially thought it would be.

9:50 p.m. – Shannon was surprised to learn that everyone was trying to backdoor her the week before she went. She was disappointed that Ross and Marissa stabbed her in the back. She still seems upset about it and has tears in her eyes. Keshia said she didn’t believe Ross was really loyal to any alliance. Metta’s biggest surprise was how terrible he was at the game. He said he was amazed by Ross’ game play. Too bad he may not have voted for him to win! Up next, the winner of “Celebrity Big Brother” will be crowned!

9:59 p.m. – Marissa was shocked that she won the game. Ross apologized about the lying but “Hello! It’s ‘Big Brother!'” Who won America’s vote? The top three vote getters were Shannon, James and Ross. Ross can be happy that he won America’s Favorite Houseguest and a $25,000 prize that goes with it. He appeared genuinely relieved he was not seen as the villain all season. Congratulations to both Marissa and Ross for a game well-played. That’s a wrap for the first season of “Celebrity Big Brother!”