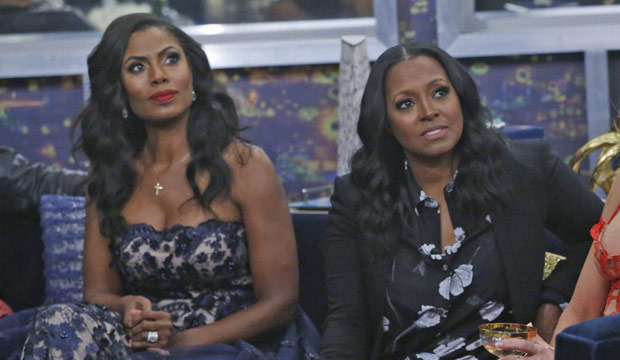 On the last episode of “Celebrity Big Brother,” Head of Household winner Ross Mathews agonized about putting up his alliance partner Shannon Elizabeth for elimination. But ultimately he decided to honor the house’s wishes by nominating reality TV villain Omarosa and “The Cosby Show” star Keshia Knight Pulliam. Was either lady saved by Monday’s Veto competition? And who did the house decide to eliminate in 10th place?

Below, check out our minute-by-minute “Celebrity Big Brother” recap of Season 1, Episode 5 to find out what happened during Monday night’s episode. Then be sure to sound off in the comments section about your favorite houseguest, who annoys you the most and who you think can go the distance to join the “Big Brother” winners list. Keep refreshing/reloading this page as we’ll be updating live.

SEEOmarosa (‘Celebrity Big Brother’) stabs Donald Trump in the back: I wouldn’t vote for him again ‘in a million years’

7:59 p.m. – “Previously, on ‘Big Brother’!” In Sunday’s fourth episode Omarosa temporarily left the game after suffering an asthma attack. After being hospitalized, she returned to the game and was promptly nominated for eviction. Omarosa and her block-mate Keshia both won’t go down without a fight, so tonight’s Veto challenge is sure to be a nail-biter. Let’s see what happens!

8:10 p.m. – Following the nomination ceremony, Omarosa plans to lay low, win the POV and find a new alliance. She’s playing nice with Ross, telling him that the real win was how much fun she’s had this summer. He’s not buying her speech, but he’s pleasantly surprised with her pleasantries. Meanwhile, Brandi Glanville and Ariadna Gutierrez thinks they’re making the wrong move. They want Shannon out NOW! Omarosa is a weak competitor and they hope to convince Ross to make a bigger move. Perhaps these two have more game play then we’ve given them credit?

8:15 p.m. – Brandi and Ariadna bring their plan to Ross. His fear is that if he doesn’t make the move now, Shannon will get him first. They hope to win the veto and save Keshia, hoping she will want to work with them. First, Ross has to convince Marissa Jaret Winkour to get on board. Originally, Marissa planned to go to the end with Shannon, but now she wants to backdoor her. Marissa feels Keshia was caught in the crossfire and will try to bring her onto their side.

8:20 p.m – Omarosa is not afraid to talk about her time in the White House. Ross is waiting for her to drop a bomb. Omarosa said there is a plan to round up illegal immigrants and things “won’t be okay.” Mark McGrath is not sure if he believes her. But Omarosa said if people are worried about Donald Trump, they should be more worried about Mike Pence. She said be careful what you wish for, because if Trump is impeached, Pence will be worse.

8:25 p.m. – Mark has successfully floated through the first week and has now been brought into the fold of Ross’ alliance. He’s on board to backdoor Shannon. The problem is that Mark’s closest ally is James. If James and Shannon receive word of this plan, there will be fireworks. In more serious game play, Metta World Peace is by himself in the hot tub playing with the flamingos. He’s on his own planet! But it’s entertaining.

8:35 p.m. – Time for a live Power of Veto competition! Ross, Keshia, Omarosa, Marissa, Shannon and Ariadna were selected to play. Two at a time, players will face off at a podium. There, a billboard will appear advertising a cruise. Julie will then ask the players a question about something on the billboard. If they buzz in first and answer the question correctly, they will move forward. If the lose, they are eliminated from the competition. In round one, Keshia eliminated Ross. Next, Omarosa defeated Shannon. In round three, Marissa took out Ariadna. Next, Omarosa took down Keshia. The final round is Marissa versus Omarosa! Marissa won the Power of Veto!

8:37 p.m. – Immediately following the competition, Marissa is pleading with Keshia to tell her what to do. Keshia is in tears. It seems as though Keshia isn’t sure she wants to stay in the house? From what I could pick up, it seems like Keshia is saying if they are saving her this week just to get rid of her next week, she would rather go home and be with her young son. But I’m not sure. Drama! Will Marissa use the Power of Veto?

8:50 p.m. – In her speech, Keshia pleaded to be sent home because her breast milk is depleting and she wants to get home to her baby. But not before throwing Shannon under the bus by telling James she did Shannon’s dirty work when she nominated him. Ouch! Omarosa then asked the houseguests to do what is best for Keshia, soliciting laughter from the live audience. In a unanimous vote, Keshia was evicted from the house. Marissa was upset she couldn’t use her veto, making it clear the backdoor plan to evict Shannon was in motion, but foiled.

8:59 p.m. – It’s official, Keshia was evicted from the “Big Brother” house! In her exit interview, Keshia admitted she purposely threw Shannon under the bus on her way out the door. Inside the house a “sympathetic” Brandi could be heard saying, “each black and white face is worth $5,000, right?”

Here are the answers to Gold Derby’s contest questions for the second LIVE episode of “Celebrity Big Brother”:

Who will be evicted live on air? Keshia Knight Pulliam

Who will win HOH live on air? No One.