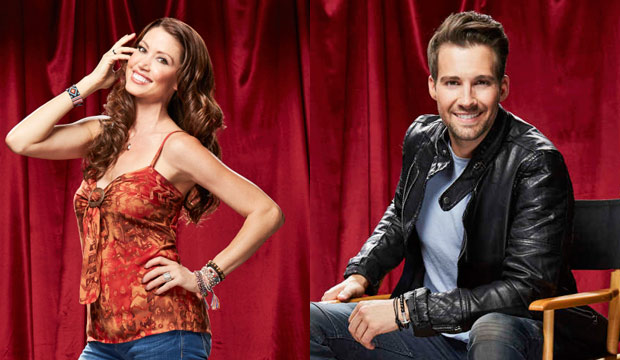 Friday night on “Celebrity Big Brother” the third houseguest was sent packing, following in the footsteps of Keshia Knight Pulliam and Chuck Liddell. Heading into the two-hour live eviction episode, “American Pie” actress Shannon Elizabeth and Big Time Rush singer/actor James Maslow were both put on the chopping block by Head of Household champ Ariadna Gutierrez. Did the Veto challenge winner take either Shannon or James off the block? And who did the house eliminate in ninth place?

SEE ‘Celebrity Big Brother’ spoiler: Round 4 Head of Household is …

Below, check out our minute-by-minute “Celebrity Big Brother” recap of Season 1, Episode 7 to find out what happened Friday, February 16. Then be sure to sound off in the comments section about your favorite houseguest, who annoys you the most and who you think can go the distance to join the “Big Brother” winners list. Keep refreshing/reloading this page as we’ll be updating live.

SEE ‘Celebrity Big Brother’ spoiler: Round four nominees for eviction on February 19 are …

7:59 p.m. – “Previously, on ‘Big Brother’!” In Wednesday’s sixth episode Ariadna just narrowly defeated James in the golf-inspired HOH comp. Ariadna and her alliance toyed with the idea of backdooring Shannon, but ultimately decided to stab her in the front by putting her on the block at the nominations ceremony. Shannon, surprising, got emotional and said she was checked out of the game, while James tried to console her. Let’s see what happens tonight!

8:10 p.m. – Ariadna made a big move by nominating the two biggest threats in the game. Shannon feels there are bigger targets in the house and they are giving her two much credit sorry. Sorry Shannon, you’re wrong. I want you to stay, but you are the strongest player in the game, or at least second to Ross. Brandi Glanville sits down with Shannon and explains its a group decision, but Shannon feels most betrayed by Ross Matthews and Marissa Jaret Winkour. She said they won’t be getting her vote at the end of the game. Shannon explains Ross, Marissa and Omarosa are just as big of threats as she is.  Shannon is adamant her “final two deal” with James is a total myth. Omarosa walks into the room and Shannon directly confronts her for lying. She said Omarosa changes the subject whenever she doesn’t want to answer a question.

8:15 p.m. – Everyone continues to tell Shannon she knows the game better than anyone else. Mark McGrath approaches the room, hears the drama and turns around. He’s disappointed to hear her giving up on the game. I like Shannon, but this sulking is pretty annoying. Unless uncontrollable crying is a plot for sympathy in an attempt to change their minds. Omarosa believes it’s the latter. Out of nowhere, Brandi asks Omarosa if she ever slept with Donald Trump. Omarosa said “Hell no!” but some woman in the White House is sleeping around with everyone. Ooo, dish it O!

8:20 p.m. – Marissa is watching James undress and get in the shower. She is giggling like a schoolgirl as she explains her view to Ross, haha. Finally, Ross sneaks a peak. But now it’s time for the veto! Selected to join Ariadna, James and Shannon in the competition are Ross, Omarosa and Brandi.

8:25 p.m. – Metta World Peace is snuggling with his stuffed owl and speaking to the cameras. This guy has the imagination of a 5-year old! I sort of admire him. I also feel like he could realistically rally in this game. He’s well-liked and each week appears less threatening to everyone else. Prior to the veto, Shannon approaches Omarosa to tell her she was gunning for Keshia, not her. Omarosa lets Shannon know that Marissa planned to backdoor her last week. Omarosa wants a woman to win. In the diary room, Omarosa admits she is just covering her tracks in case Shannon wins the veto.

SEE Omarosa (‘Celebrity Big Brother’) stabs Donald Trump in the back: I wouldn’t vote for him again ‘in a million years’

8:35 p.m. – Omarosa plants seeds of doubt in James’ mind by telling him he’s the target. He immediately goes and tells the rest of the group and they are gobsmacked. Ross and Marissa approach Ariadna and tell her what James has said. Any chance of teaming up with Omarosa is out the window. They’re planning to use her as a replacement nominee if they need to. Brandi confronts Omarosa and she boldly denies it and said she’s never even spoken to James. Marissa goes to get James and Ross; bring on the drama! In the group discussion, James said Omarosa explicitly told him he was in trouble. Omarosa doubled down and said James asked her if his deal with Marissa and Ross was over? Everyone believes James, but tells Omarosa they believe her.

8:43 p.m. – Ariadna is expressing concern about keeping James in the house. Ross is frustrated because once again Omarosa has caused chaos in the house. Brandi believes if he doesn’t go home, he will come after her and Ariadna, so suggests they bring him into the alliance. They want to convince him to gun for Omarosa next week if he wins HOH. Brandi is kicking herself for bringing up the idea, but it’s not a terrible plan. Shannon hears Brandi call James to the HOH room and goes deeper into her depression. She goes to Metta with a last-ditch effort for any sort of alliance, but he’s gunning for her because she didn’t let him quit in week one. Ugh, what a loser.

8:45 p.m. – James is officially offered a Final Five deal with Ariadna, Brandi, Marissa and Ross. He doesn’t really want to be in an alliance with them, but he takes the deal and tells them what they want to hear.

8:55 p.m. – Julie surprised the houseguests with messages from their loved ones, and mentions she’s in her sexy red dress to celebrate the Chinese New Year! Work Julie! Metta’s wife is GORGEOUS and tells him to stop trying to quit. Marissa’s son is adorable. Brandi gets a message from Andy Cohen; is anything about her not contrived? Ariadna gets a message from her father, who is in the hospital. She becomes an emotional wreck, but was happy to hear from him.

9:05 p.m. – Omarosa is telling Mark and Metta that she had to teach former Press Secretary Sean Spicer how to pronounce words. As for the investigation into Trump? Omarosa said they wouldn’t be this far into the administration if there was anything that rose to the level of impeachment. Anyways time for the veto competition! In “Chez Noir,” contestants must eat four courses in a pitch dark room and then navigate their way to the light switch to stop the timer. The person to complete the task the fastest will win.

9:25 p.m. – James won the Power of Veto! Shannon finished in a devastating second place. Ariadna now has to decide who to nominate in James’ place. Brandi suggests Omarosa, who is already used to being on the block. Ross doesn’t want to poke that bear and would prefer Mark going on the block, but the choice is up to Miss Colombia.

9:35 p.m. – Not surprisingly, James chose to use the veto on himself. Ariadna decided to replace him with Mark. Mark is not surprised to find himself at the bottom of the totem pole, but insists the houseguests shouldn’t underestimate him. For Shannon to stay, she needs a miracle. Shannon is beyond the tears and is in the stage of fury. She told Jason he needs to break up Ross and Marissa and then Brandi and Ariadna. Ross tells his alliance to “put it on ice” and expects Shannon to throw atomic bombs until she’s evicted.

9:45 p.m. – It’s time for the live vote and eviction. Mark gave a long, boring speech. Shannon brought awareness to animals and the poaching crisis in Africa. Time to vote! Bucking the trend, Brandi voted to evict Mark, but Shannon was evicted from the house. Does Brandi have feelings? Or is she wisely taking this moment to solicit a potential jury vote?

9:55 p.m. – The only goodbye message that Shannon seemed genuinely moved by came from Metta. If he can make it to the end, he may be the only player everyone likes. Is he a threat to win it all? I think so.

9:59 p.m. – It is now time for the live HOH competition. As the outgoing HOH, Ariadna is not eligible to compete. In “Courtside Seats,” players need to hold on for power as they are tilted forward while awkwardly sitting against a wall. The winner will be revealed on Sunday’s episode of “Celebrity Big Brother.”

SEE ‘Celebrity Big Brother’ spoiler: Round 4 Head of Household is …

Here are the answers to Gold Derby’s contest questions for the third LIVE episode of “Celebrity Big Brother”:

Who will be evicted live on air? Shannon Elizabeth

'Celebrity Big Brother 2' spoilers: The houseguests are torn over who to evict after that lame Veto…