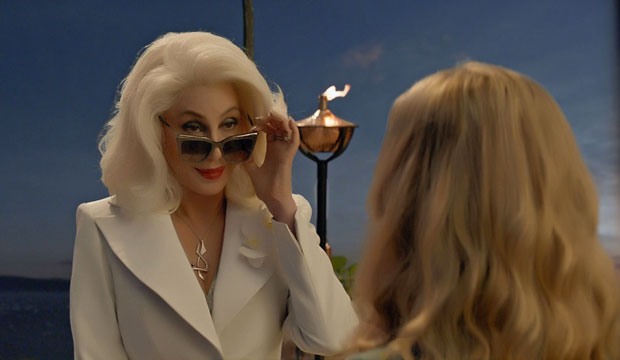 “Mamma Mia: Here We Go Again” could bring Cher her lucky seventh Golden Globe nomination. The well-reviewed film has raked in more than $350 million to date. The Hollywood Foreign Press Association loves to recognize box office hits almost as much as it loves a good comeback story. Cher hadn’t made a move in almost 10 years and makes quite the return to the screen in “Mamma Mia: Here We Go Again.” Her entrance is via helicopter and she looks smashing in a white suit and wig.

She plays Ruby Sheridan, the mother of Meryl Streep‘s character Donna who travels to the idyllic Greek isle to to support her granddaughter Sophie (Amanda Seyfried‘) who is pregnant. Ruby has a dramatic reunion with her ex-lover, Fernando, played by Andy Garcia. That scene, in which they sing, er, “Fernando,” is one of the highlights of the movie.

Remember, the HFPA loves to recognize Oscar winners in showy supporting roles with nominations, including Julia Roberts (“Charlie Wilson’s War”); Shirley Maclaine (“In Her Shoes”); and Susan Sarandon (“Igby Goes Down”). And the Golden Globes could be eager to welcome back Cher, who last appeared on-screen in the 2010 camp classic “Burlesque.”