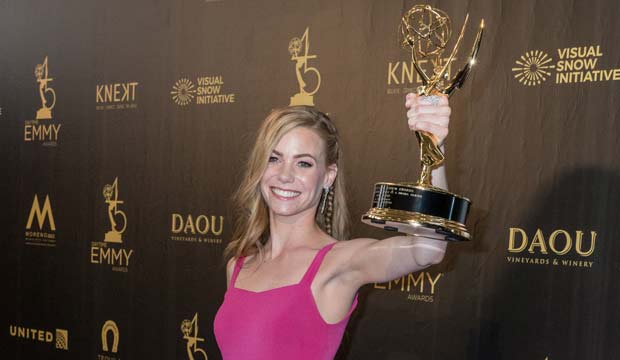 When it rains it pours. Reigning Daytime Emmy winner for Best Actress Eileen Davidson recently confirmed that she’s leaving “The Young and the Restless.” And now daytime is losing another champ: this year’s Best Younger Actress victor Chloe Lanier is jumping ship from “General Hospital” after her contract is up. What do you think of her imminent exit? Vote in our poll at the bottom of this post to let us know how she should be written out.

Lanier first appeared on “GH” in 2015, when she played the older sister of Luke Spencer (Anthony Geary) in flashbacks. She returned to the show on a full-time basis in 2016 when she was introduced as Nelle, the secret adoptive sister of Carly Corinthos (Laura Wright). Nelle was hell-bent on revenge after her father sold her kidney to save Carly’s sick daughter. Her devious schemes have included drugging Sonny Corinthos (Maurice Benard) and convincing him that they slept together, and later gaslighting Carly to make her believe she was being haunted by her dead son.

The actress earned two straight Emmy nominations for Best Younger Actress (2017-2018), winning on her second try earlier this year. How do you think Lanier will be written out? Will Nelle’s evil deeds finally catch up to her? Read some of our forum posters’ reactions below, and join the discussion with them in our message boards.

FreemanGriffin: “This is the latest in a long line of actors from daytime who have left their roles lately. I enjoyed Nelle and found her to be a fun villainess and will miss her. Here’s hoping she moves to prime-time success!”

EmmyLoser: “I think Lanier is very talented but it didn’t seem like the audience enjoyed Nelle all that much. I wish her good luck! With the quick succession of Lanier and Eileen Davidson leaving their shows, and Rome Flynn having already been gone from B&B even before the Emmys, half of this year’s big six acting Emmy winners will soon be off their shows.”

OLTLfan: “Good actress but AWFUL character. The writers just didn’t know what to do with her. A bad girl character should be fun. Nothing about Nelle or her ridiculous schemes has ever been fun.”

robbalto: “Lanier is an excellent actress. Her talents were wasted on the role of Nelle, who was poorly-written. Remember how much we loved her on the anniversary episode of ‘GH’? Too bad they couldn’t have written her character more like that.”