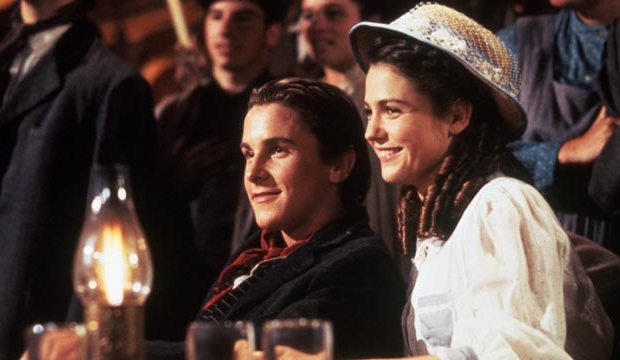 Though only 43, Christian Bale is thought by many to have become an “actor’s actor.” He is fully committed to his characters, often staying in character during shooting, and he is not afraid to lose or gain weight in order to make a character more believable, as is the case with his currently-shooting film in which Bale has stuffed on the pounds to play Dick Cheney.

Bale did not have to undergo any severe physical transformation in his current role as Capt. Joseph A. Blocker in his second collaboration with director Scott Cooper in “Hostiles,” which is expanding around the country this weekend. As Blocker, Bale is in an old-fashioned western as as U.S. cavalry officer who must escort a Cheyenne chief back to their tribal lands in 1892 and has received strong reviews for his portrayal.

Let’s take a tour of his eclectic career in our photo gallery featuring his 12 greatest films, ranked from worst to best. Which one is your favorite?

12. NEWSIES (1992)
As Bale’s first and only musical, “Newsies” was a flop on its first release, but the film was one of those movies that gained a huge fan base once it was released on home video. Loosely based on the Newsboys Strike of 1899 in New York City, Bale plays teenage newsboy Jack Kelly, who rebels against Joseph Pulitzer (Robert Duvall).

11. OUT OF THE FURNACE (2013)
Before his work with writer/director Cooper in “Hostiles,” the two collaborated on this 2013 thriller in which Bale played Russell Baze, a debt-ridden steel worker whose Iraq vet brother Rodney (Casey Affleck) makes chump-change duking it out in bare-knuckle fights in rural Pennsylvania.

10. THE NEW WORLD (2005)
In writer/director Terrence Malick‘s retelling of the legend of Pocahontas, Bale steps into the key role of John Rolfe, an English settler in 17th Century Jamestown, Virginia, who comforts Pocahontas (Q’orianka Kilcher) of the Powatan Native American tribe, who believes that the love of her life, Captain John Smith (Colin Farrell) is dead.

9. EMPIRE OF THE SUN (1987)
As schoolboy Jamie Graham in Shanghai during World War II, Bale captures the terror of being separated from his parents during the Japanese invasion and the adventure of partnering up with a couple of American hustlers, whose idea of hustling leads to acts that wind up placing them in a Japanese internment camp.

8. PUBLIC ENEMIES (2009)
Just as he did in “3:10 to Yuma” two years before, Bale plays the good guy in a genre film for which there is a formidable bad guy — in this case hoodlum John Dillinger (Johnny Depp).  In Michael Mann’s gangster film, Bale portrays celebrated FBI agent Melvin Purvis, whose focus appears to be fixated on bringing Dillinger and his mobster cohorts to justice.

7. 3:10 TO YUMA (2007)
In James Mangold’s 2007 remake of the classic Delmer Daves western, Bale co-stars as one-legged rancher Dan Evans who, broke because of a drought, agrees to take on the job of escorting dangerous outlaw Ben Wade (Russell Crowe) to the 3:10pm train for Yuma Territorial Prison.

6. THE PRESTIGE (2006)
This mystery/thriller, directed by Christopher Nolan, set in the world of stage magic in 1890s London, starred Bale and Hugh Jackman as rival magicians who attempt to top each other to see who is the best, and the results are tragic.

5. AMERICAN PSYCHO (2000)
Bale’s career came roaring back to life in the 2000 adaptation of Bret Easton Ellis‘ notorious best-seller focusing on investment banker Patrick Bateman (Bale) whose obsession with material one-upsmanship (even down to the paper quality of one’s business card) drives him into a homicidal rage.

4. THE BIG SHORT (2015)
Based on Michael Lewis‘ non-fiction chronicle of the 2007-2008 financial crisis following a housing bubble in America, Adam McKay‘s adaptation of the book focuses three distinct but concurrently told stories. The first features flaky hedge fund manager Michael Burry (Bale) who offers a wild theory that, based on high-risk subprime loans, the U.S. housing market is extremely unstable.

3. THE BATMAN Films (2005, 2008, 2012)
Bale starred as Batman/Bruce Wayne in the three most acclaimed Batman films of all time — Nolan’s “Batman Begins (2005), “The Dark Knight” (2008) and “The Dark Knight Rises” (2012) — giving a dark, tortured performance that has captured the imagination of Batman fans everywhere.  Never too far emotionally from the killing of his parents, Bale’s Bruce Wayne is a brooding millionaire anxious to avenge his parents’ murders by wiping out those who threaten Gotham City.

2. AMERICAN HUSTLE (2013)
Although Bale is known to be a bit of a shape-shifter when it comes to his characters, he has never shifted his shape into a character quite like con artist Irving Rosenfeld in David O. Russell‘s black comedy “American Hustle.” To capture the essence of Rosenfeld’s character, Bale donned a fat suit and added an absurdly hideous combover hairstyle, making him look like the world’s most unlikely film-flam man.

1. THE FIGHTER (2010)
Bale’s screen triumph to date is in Russell’s biographical sports drama based on the life of professional boxer Micky Ward (Mark Wahlberg), who is being trained by his older half-brother Dicky Eklund (Bale), a former fighter who is now hooked on crack cocaine. When he arranges a fight for Micky in which he is clearly outclassed and beaten, Dicky turns to crime and is sent to prison.