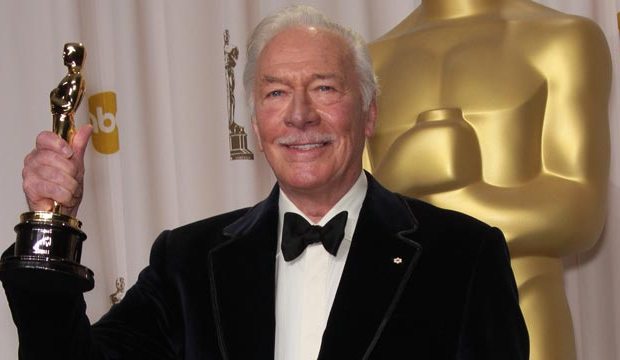 Stage, film, television. For well over over five decades, Christopher Plummer has been one of our most esteemed and honored actors across all acting fields. He has won two Tony awards (out of seven nominations) for his stage work — the musical “Cyrano” (1974) and the one-man show “Barrymore” (1997), which was later turned into a film. For his television work, he has also won two Emmy Awards (out of six nominations)  for the TV movie “The Moneychangers” (1977) and for his voice-over performance in the animated “Madeline” (1994).

But similar awards for his work in film eluded him for many years. True, he did co-star in 1965’s “The Sound of Music,” a film he had disdained for the longest time but one that was a phenomenon at the box-office. The musical ran in theaters for over 4 1/2 years and, adjusted for inflation, “The Sound of Music” has grossed $2.366 billion, currently making it the fifth highest-grossing film of all time. Yet he received no honors for his performance.

It wasn’t until 2009’s “The Last Station” in which he portrayed writer Leo Tolstoy that Plummer received his first Oscar nomination as Best Supporting Actor. For his second, as a father who comes out as gay at age 75 in “Beginners” (2011), Plummer finally won the coveted statue at age 82, making him the oldest acting winner in Oscar history. And now at age 88, Plummer’s surprise third nomination as Best Supporting Actor in “All the Money in the World” makes him the oldest acting nominee in any category.

It marks a career-capping moment for the long-time movie star, who has appeared in several of the great Hollywood films of the last century. Let’s take a look at his greatest film performances in the photo gallery above and rank his 12 best.

SEEOscars flashback: Watch as Christopher Plummer confesses he was rehearsing his acceptance speech since birth

12. TWELVE MONKEYS (1995)
For Terry Gilliam‘s time-travel sci-fi epic, Plummer takes on the role of virologist Dr. Goines, father of Jeffrey Goines (Brad Pitt) who was the founder of the Army of the Twelve Monkeys, a radical group that unleashed a virus in 1996 that was discovered by Dr. Goines and wiped out almost all of humanity.

11. A BEAUTIFUL MIND (2001)
Ron Howard‘s film that won the Oscar for Best Picture, provided Plummer with a small but pivotal role as Dr. Rosen, a psychiatrist whom the film’s protagonist, paranoid schizophrenic economist John Nash (Russell Crowe) believes is a Soviet agent.

10. INSIDE MAN (2006)
In Plummer’s second collaboration with Spike Lee and Denzel Washington, Plummer puts on his grey flannel suit to portray Arthur Case, a titan of Wall Street banking who is hiding a secret inside a safe deposit box that he wants to keep from a gang of bank robbers, led by Clive Owen.

9. THE MAN WHO WOULD BE KING (1975)
Plummer played a key role in John Huston‘s terrific film of the adventure novella by Rudyard Kipling. In fact, Plummer plays Kipling himself, appearing in the bookend portions to the adventure story as the writer who is approached by Peachy (Michael Caine), one of the characters in that story, who proceeds to provide startling proof to Kipling that the story actually happened.

8. DOLORES CLAIBORNE (1995)
Plummer’s take on a small-town police detective in Taylor Hackford‘s film version of the Stephen King novel is one of a determined investigator who is convinced that Dolores (Kathy Bates) not only murdered her abusive husband years ago but is now guilty of killing her current employer.

7. MURDER BY DECREE (1979)
Plummer took the lead as Sherlock Holmes (with an able assist by James Mason as his Dr. Watson) in Bob Clark‘s revisionist look at the famed Baker Street sleuth. Plummer still plays Holmes as a bit of an aesthete (similar to the Basil Rathbone approach), but he received significant praise for creating a much more human Sherlock Holmes, displaying a streak of empathy that had been missing from other incarnations of the character.

SEE2018 Oscars: Christopher Plummer (‘All the Money in the World’) gunning to be seventh person to win Best Supporting Actor twice

6. INSIDE DAISY CLOVER (1966)
In Robert Mulligan‘s tough Hollywood drama, Plummer plays top film producer Raymond Swan who discovers tomboy Daisy Clover (Natalie Wood) and is determined to make her a star and control her image, which includes placing her eccentric mother (Ruth Gordon) in an institution.

5. THE LAST STATION (2009)
At age 80, Plummer received his very first Oscar nomination for his supporting work. The chemistry that Plummer shares with co-star Helen Mirren, who plays his wife Sonja (who is trying to decide the contents of the dying Tolstoy’s estate) is absolutely palpable. In addition to his Oscar nod, Plummer also received a Screen Actors Guild nomination for his performance.

4. THE SOUND OF MUSIC (1965)
Although Plummer has tried for decades to disassociate himself from the smash-hit musical, he is actually quite good in the film. His Captain von Trapp opposite Julie Andrews begins as an authoritarian father who treats his children like a military unit but soon makes a key turn to reveal himself as a loving father. Plummer sows enough seeds early in the film that he is not the bully he appears to be so that when he makes the turn, it’s entirely believable.

3. BEGINNERS (2011)
For his performance as Hal, a 75 year-old who comes out as gay after the death of his wife, Plummer won his first Academy Award, Golden Globe and SAG Award as Best Supporting Actor. Hal is loosely based on the real-life experience of writer/director Mike Mills‘ own father, but Plummer adds some flourishes of his own, with a relaxed physical gait that suggests an unburdening from the tension of living in the closet for so long. A wonderfully subtle piece of work.

2. ALL THE MONEY IN THE WORLD (2017)
The story behind Plummer’s casting in this Ridley Scott film is as famous as the film itself. With Scott’s film completely shot and awaiting release, co-star Kevin Spacey became involved in a sexual abuse scandal, and Scott made the decision to recast Plummer in the Spacey role as J.P. Getty, filming furiously for six weeks. And it turns out that Plummer’s steely performance as the multi-billionaire is one of his best ever. For his performance as Getty, Plummer received his third Oscar nomination and his third Golden Globe nomination in the film category.

1. THE INSIDER (1999)
Arguably, Plummer’s greatest screen performance is one for which he was not nominated for an Academy Award — as “60 Minutes” host Mike Wallace in Michael Mann‘s great film. Though not resembling or even sounding like Wallace, Plummer nevertheless captures the journalistic strength of Wallace as he is unafraid on camera to go toe to toe with anyone, and his character arc turns out to be one of the more dramatic in the film. Just brilliant work.