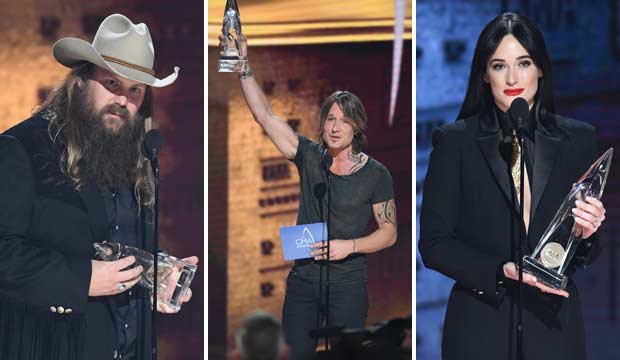 The 2018 Country Music Association Awards were chock full of surprises when they were handed out on Wednesday, November 14, and it ended with one of the night’s biggest upsets. Keith Urban was shocked that he won Entertainer of the Year, and it took us by surprise too. It was only his second victory in the top category, and the last time was more than a decade ago — way back in 2005. The combined predictions of hundreds of Gold Derby users ranked him fourth with 7/1 odds, behind Luke Bryan, Chris Stapleton and Jason Aldean. Check out the complete list of winners here.

But don’t feel too bad for Stapleton. Though he still hasn’t won top honors at the CMA Awards he did take home the most hardware. He prevailed three times: Male Vocalist of the Year for the fourth year in a row, as well as Single of the Year and Song of the Year for “Broken Halos.” He has won multiple awards every year since his 2015 breakthrough, and he’s now a 10-time CMA champ overall.

Besides Entertainer of the Year, Stapleton only lost one other category: Album of the Year. He was undefeated in that race, having prevailed for “Traveller” (2015) and “From A Room: Volume 1” (2017), but “Volume 2” was overtaken by the critically hailed “Golden Hour” by Kacey Musgraves. It was her first win in that category and her third CMA win to date following victories for New Artist of the Year in 2013 and Song of the Year (“Follow Your Arrow”) in 2014.

Musgraves had one other nomination on CMA night, and it was the one we thought she’d win: Female Vocalist of the Year. But instead the association went back to a past favorite: Carrie Underwood, who took a break from hosting the show for the 11th year in a row to accept the prize for the fifth time. She previously won three consecutively from 2006-2008, and then again in 2016 after a long winning streak by Miranda Lambert, who holds the all-time record in the category with seven victories.

What did you think of this year’s big winners and shocking upsets? Comment below, and join the discussion on this and more with your fellow music fans in our forums.